In today's episode of How Not To Deal With Conspiracy Theorists, we have: the people who run the Denver Airport claiming that all the conspiracy theories about the place are actually true.

Controversy has been swirling around Denver International Airport for some time now.  Long-time readers of Skeptophilia may recall that two years ago, a loon named William Tapley who calls himself "The Third Eagle of the Apocalypse" (he doesn't specify what happened to Eagle #1 and Eagle #2) said he believed that Donald and Melania Trump were both being controlled by the Illuminati, and he knows this because of a mural in the Denver Airport featuring a woman who looks vaguely like Melania.

But that's only the merest fraction of what's been claimed about the airport.  And to be fair, there's some weird stuff there.  First, there's a horse statue out front that has LED eyes and is really freakin' creepy, and also for some reason bright blue.  Supposedly, the horse statue collapsed on its creator shortly after completion and killed him, and that led to the claim that the statue is cursed. 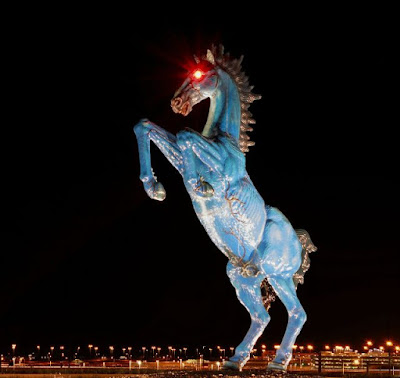 And as crazy as Tapley is, I have to admit he has a point about the murals.  I mean, when you're rushing to catch a plane, and feeling frustrated and irritable, you wouldn't want to see this: 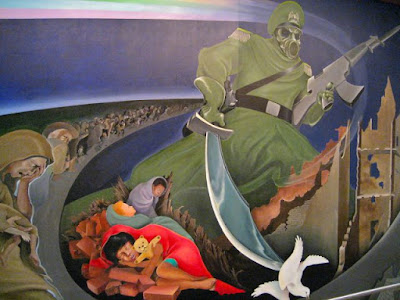 Or maybe that's just me.  Maybe some air passengers would see this and think, "Okay, maybe my flight has been delayed six hours and I haven't had anything to eat all day but a stale packet of pretzels and now I'm going to be lodged for three hours in a seat that would be cramped for a small child, but at least I'm not being threatened with a scimitar by a Nazi wearing a gas mask."

Anyhow, there were all these ideas floating around that the people who run the airport were in league with the Powers of Darkness, or with the New World Order at the very least.  Some people said that hidden beneath the airport is a portal to hell.  (All I can say is in the "hell" category, Denver Airport is never going to beat Chicago-O'Hare.)  And instead of saying, "Look, will y'all just calm down?  None of this is true," the folks in the airport have been playing it up.

In an area that's under renovation, there are some signs like, "Under construction?  Or... underground tunnels?"  Another one said:


What are we doing?
A) Adding amazing new restaurants and bars
B) Building an Illuminati headquarters
C) Remodeling the lizard people’s lair

"I think that we recognize that conspiracy theories are part of our brand," airport spokesperson Emily Williams told the Denver Post.  "It’s a fun way that we can engage with our passengers."

All I can say is: you don't know these conspiracy theorists.

By playing in, they're going to have every conspiracy theorist in the world thinking that the Illuminati are getting cocky and bragging about how their plans for world domination are going.  The idea that the powers-that-be in Denver are making fun of them would never occur to them.  Conspiracy theorists, in general, are completely unfamiliar with the concept of Poe's Law.

On the other hand, it's kind of a losing battle anyway.  If you do what the Denver Airport people are doing, which is to say, "Yes, you're right.  We're evil Satanic Illuminati who are trying to destroy the Earth, bwa ha ha ha ha ha," the conspiracy theorists will say, "See?  I told you so!"  If instead you were to say, "Don't be a bunch of nimrods.  We have an airport to run, we have far more pressing issues to attend to than creating portals to hell," the conspiracy theorists will answer, "Of course that's what you would say.  Your denial means you're covering up something."

So you can't win.  But I still don't think it's a good idea to give them more ammunition.  Probably the wisest course of action would be to lay low and go about business as usual, and hope that the conspiracy theorists choose another activity, such as picking at the straps of their straitjackets with their teeth.

But I guess all hope of that ended when they put up the statue of Blucifer.  So what the hell, may as well have a little fun, I guess.