The lighter side of science

If you think that scientists are a bunch of dry-as-dust, humorless nerds, all you have to do to realize you were wrong is to read about Thursday evening's gala ceremony.

Called the Ig Nobel Prizes, it's an event that's been taking place at Harvard University annually for the last 28 years.  The idea is to recognize research (and researchers) whose work is probably never going to receive an actual Nobel -- but deserves to be in the spotlight purely for the absurdity and humor value. 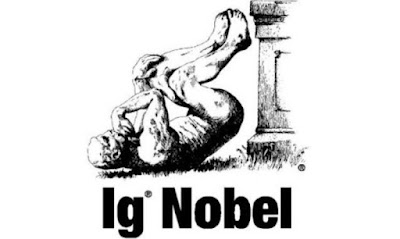 This year's recipients:
Some of these seem to me to fall into the "you needed to do research to find that out?" category.  Like the reading-the-manual one.  I'm the worst ever about this.  When we get something that needs assembly, my first step is always to yell, "Carol, can you help me with this?"  She's methodical and careful and makes sure I don't use my usual method, which is to jam things together whichever way seems right, a technique that always results in leftover parts and sub-optimal performance.

Also, I'm not at all shocked that skewering a voodoo doll would be highly satisfying.  I'm lucky enough to work for an awesome principal, but I've had bosses who I would have gladly stabbed in effigy.  A pity I didn't know about this sooner.

Oh, and the nocturnal erection study; are there guys who don't get erections while they're asleep?  I thought that was kind of hard-wired.

In any case, the winners each year get invited to a ceremony wherein they're wined and dined and given their cash prize (a $10 trillion bill from Zimbabwe, which is worth a few cents).  They then have to give an acceptance speech, which if it goes over sixty seconds is interrupted by an eight-year-old girl yelling, "Please stop, I'm bored" over and over until they give up.

As is usual with the Ig Nobel Ceremony, good times were had by all and sundry.  The audience is encourage to participate by folding up their programs into paper airplanes and throwing them at the presenters.

So that's this week's hilarity from the world of science.  And if you wanted more evidence of scientists having a great sense of humor, you should definitely check out The Journal of Irreproducible Results, which is the best science journal spoof in the world.

Now, y'all'll have to excuse me.  I'm heading off to the post office.  I seem to be out of stamps.