I was alerted to this story because I was perusing science research sites and saw a photograph that looked, to my untrained eye, like a Croc shoe with eyes and a pine cone stuck on the heel.  After saying, "What the hell is that?" I found that it was a reconstruction of a primitive vertebrate called a placoderm, or armored fish.  Lest you think my description is an exaggeration, there's the beast that caught my eye: 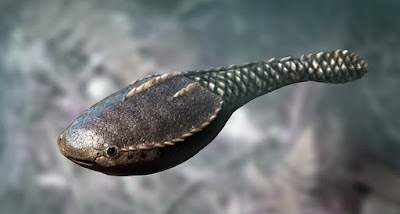 This led me to a paper in Science called "The Nearshore Cradle of Early Vertebrate Diversification," by Lauren Sallan, Matt Friedman, Robert S. Sansom, Charlotte M. Bird, and Ivan J. Sansom, wherein I found that this was by far not the weirdest-looking reconstructed critter in the study.  Here are a few others (all reconstructions by Nobumichi Tamura): 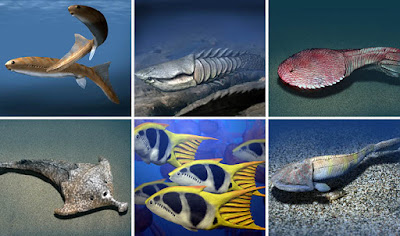 The research, though, is pretty damn cool.  The authors write:


Ancestral vertebrate habitats are subject to controversy and obscured by limited, often contradictory paleontological data.  We assembled fossil vertebrate occurrence and habitat datasets spanning the middle Paleozoic (480 million to 360 million years ago) and found that early vertebrate clades, both jawed and jawless, originated in restricted, shallow intertidal-subtidal environments.  Nearshore divergences gave rise to body plans with different dispersal abilities: Robust fishes shifted shoreward, whereas gracile groups moved seaward.  Fresh waters were invaded repeatedly, but movement to deeper waters was contingent upon form and short-lived until the later Devonian.  Our results contrast with the onshore-offshore trends, reef-centered diversification, and mid-shelf clustering observed for benthic invertebrates.  Nearshore origins for vertebrates may be linked to the demands of their mobility and may have influenced the structure of their early fossil record and diversification.

They also bring up an interesting conjecture; that the tougher anatomy, and especially the presence of a backbone to protect the dorsal nerve cord, might have arisen because of the rough-and-tumble nature of near-shore ecosystems -- you have to be tough or you'll get battered to pieces by the waves.

That, in fact, is why this study was such a mammoth undertaking.  "The main problem is that the fossil record [of vertebrates] is absolutely terrible for the first fifty million to one hundred million years of their existence," said paleobiologist Lauren Sallan of the University of Pennsylvania, in an interview with Science News.  "And when [there are] fossils, they’re in tiny pieces.  It’s hard to tell what exactly’s going on."

The researchers put together the pieces of 2,827 fossils that date to the age range they were studying, and came to the conclusion that all vertebrates trace their lineage back to shallow, near-shore environments.  So maybe I shouldn't laugh at Pine Cone Butt and the Spotted Funnel-Head.  They could be my great-great-great (etc.) grandparents.

I've always had a fascination for paleontology, and this study impresses me not only for its breadth but for what it tells us about our own ancestry.  The forces of evolution have created some amazing-looking creatures, and it's wonderful that we're getting a look into where they may have lived.  It does bear mention, however, that even with the thoroughness of the Sallan et al. study, we're still barely scratching the surface.  We only know about the species that left fossils behind -- which by some estimates is less than a hundredth of a percent of the species that were around at any given time.

So imagine what it would be like to go back there and see it for yourself, back to a time when there was not a single species of plant or animal around that exists today.  Mind-blowing, no?  As the old adage goes, the only thing that is constant is change -- and that is especially true with the natural world.