I've discussed the Fermi Paradox here at Skeptophilia before -- and the cheerful idea of the Great Filter as the reason why we haven't heard from alien life.  As I explained in a post last month, the explanation boils down to three possibilities, nicknamed the "Three Fs."

Being an aficionado of all things extraterrestrial, that has never sat well with me.  The idea that we might be all alone in the universe -- for any of the three Fs -- is just not a happy answer.  Yes, I know, I always say that the universe is under no obligation to act in such a way as to make me happy.

But still.  C'mon... Vulcans?  Time Lords?  Ewoks?  G'gugvuntts and Vl'hurgs?  There's got to be something cool out there.  With luck, lots of cool things.  The Dentrassi, Quantum Weather Butterflies, Andorians, the Vashta Nerada...

Okay, maybe not the Vashta Nerada.  But my point stands. 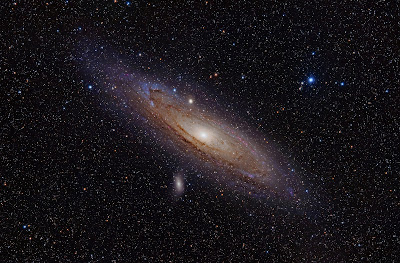 So I was considerably cheered yesterday when I ran into a study out of Pennsylvania State University that attempted to estimate what fraction of the universe we actually have surveyed in any kind of thorough fashion.  The authors, Jason Wright, Shubham Kanodia, and Emily G. Lubar, write:


Many articulations of the Fermi Paradox have as a premise, implicitly or explicitly, that humanity has searched for signs of extraterrestrial radio transmissions and concluded that there are few or no obvious ones to be found.  Tarter et al. (2010) and others have argued strongly to the contrary: bright and obvious radio beacons might be quite common in the sky, but we would not know it yet because our search completeness to date is so low, akin to having searched a drinking glass's worth of seawater for evidence of fish in all of Earth's oceans.  Here, we develop the metaphor of the multidimensional "Cosmic Haystack" through which SETI hunts for alien "needles" into a quantitative, eight-dimensional model and perform an analytic integral to compute the fraction of this haystack that several large radio SETI programs have collectively examined.  Although this model haystack has many qualitative differences from the Tarter et al. (2010) haystack, we conclude that the fraction of it searched to date is also very small: similar to the ratio of the volume of a large hot tub or small swimming pool to that of the Earth's oceans.  With this article we provide a Python script to calculate haystack volumes for future searches and for similar haystacks with different boundaries.  We hope this formalism will aid in the development of a common parameter space for the computation of upper limits and completeness fractions of search programs for radio and other technosignatures.

The actual analogy Wright and his colleagues used is that saying our current surveys show there's no intelligent life in the universe (except for here, which itself seems debatable some days) is comparable to surveying 7,700 liters of seawater out of the total 1.335 billion trillion liters in the world's oceans.

So basing a firm conclusion on this amount of data is kind of ridiculous.  There could be intelligent alien species out there yelling, "Hey!  Earthlings!  Over here!  We're over here!", and all we would have to do is have our radio telescopes pointed a couple of degrees off, or tuned to a different wavelength, and we'd never know it.

Which is pretty cool.  Given the fact that my all-time favorite movie is Contact, I'm hoping like hell that people don't read Wright et al.'s paper and conclude we should give up SETI because it's hopeless to make a thorough survey.  When I think about what poor Ellie Arroway went through trying to convince her fellow scientists that her research was valid and deserved funding... yecch.  And if anything, the current attitudes of the government toward pure research are, if anything, worse than those depicted in the movie.

But despite all that, it's awe-inspiring to know we've got so much room to explore.  Basically... the entire universe.  So my dream when I was a kid, sitting out in my parents' yard with my little telescope, that as I looked at the stars there was some little alien boy in his parents' yard looking back at me through his telescope, may one day prove to be within hailing distance of reality.