The seat of free will

The subject of whether or not humans have free will has been debated ad nauseam for centuries by much wiser heads than my own.  I'm up front about being a generalist (the type of person whose knowledge has been described less flatteringly as "a light year across and an inch deep"), and although there are a few areas I have some small degree of expertise in, philosophy ain't one of them.

So I'm unqualified to discuss whether free will actually exists, but I was still pretty intrigued when I read a paper a few days ago about some neuroscientists who have found the brain regions where activity gives us the sense of having free will. 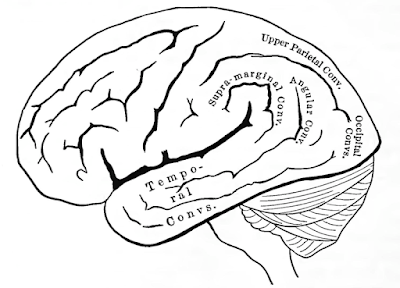 The researchers, R. Ryan Darby (of Vanderbilt University), and Juho Joutsa, Matthew J. Burke, and Michael D. Fox (of Beth Israel Deaconess Medical Center, the teaching hospital for Harvard University), looked at people with brain lesions that seemed to interfere with volition.  They investigated two different odd neurological disorders stemming from lesions -- akinetic mutism (which causes people to move their own limbs to accomplish actions without being conscious of it) and alien limb syndrome (in which one or more limbs seems to be under someone else's control).


Our perception of free will is composed of a desire to act (volition) and a sense of responsibility for our actions (agency).  Brain damage can disrupt these processes, but which regions are most important for free will perception remains unclear.  Here, we study focal brain lesions that disrupt volition, causing akinetic mutism (n = 28), or disrupt agency, causing alien limb syndrome (n = 50), to better localize these processes in the human brain.  Lesion locations causing either syndrome were highly heterogeneous, occurring in a variety of different brain locations.

The scientists reasoned that despite the lesions not seeming to form a pattern of any kind, there had to be some commonality given the similar symptoms of the lesion sufferers.  And they found it:


We next used a recently validated technique termed lesion network mapping to determine whether these heterogeneous lesion locations localized to specific brain networks.  Lesion locations causing akinetic mutism all fell within one network, defined by connectivity to the anterior cingulate cortex.  Lesion locations causing alien limb fell within a separate network, defined by connectivity to the precuneus.  Both findings were specific for these syndromes compared with brain lesions causing similar physical impairments but without disordered free will.  Finally, our lesion-based localization matched network localization for brain stimulation locations that disrupt free will and neuroimaging abnormalities in patients with psychiatric disorders of free will without overt brain lesions.  Collectively, our results demonstrate that lesions in different locations causing disordered volition and agency localize to unique brain networks, lending insight into the neuroanatomical substrate of free will perception.

The final piece came into place when they looked at cases where people who had strange (temporary) side effects from targeted magnetic fields "knocking offline" certain brain regions -- and found that the ones who had akinetic mutism-like symptoms lost activity in brain networks connected to the anterior cingulate cortex, and those describing alien limb syndrome-like symptoms lost activity in ones connected to the precuneus.

What I find most interesting in all of this is how easily our sense of agency can be disrupted.  It seems to be one of our most basic sensations, that we are in control of what we think and do.  The idea that it's this easily altered is a little frightening, and once again brings home what I always tell my neuroscience students -- that in reality you just have one sense organ.  Your brain.  If you alter the electrical impulses coming into or out of your brain, that altered pattern becomes your reality -- even if it's completely at odds with the real world.

So the Darby et al. research doesn't even begin to settle the overall free will question, but it does give us a lens into why we feel like we have free will.  As for me, I think that's about as much philosophy as I can handle.  I'm gonna will myself to get up and get a second cup of coffee.