As you might expect from someone who is passionately interested in both genealogy and evolutionary genetics, when there's a study that combines both, it's a source of great joy to me.

This week, Nature published a study on the evolutionary history of humans in northern Europe, specifically the Finns.  Entitled, "Ancient Fennoscandian Genomes Reveal Origin and Spread of Siberian Ancestry in Europe," it was authored by no less than seventeen researchers (including Svante Pääbo, a Swedish biologist who is widely credited as founding the entire science of paleogenetics) from the Max Planck Institute, the University of Helsinki, the Russian Academy of Sciences, the Vavilov Institute for General Genetics, and the University of Turku.

Quite a collaborative effort.

It's been known for a while that Europe was populated in three broad waves of settlement.  First, there were hunter-gatherers who came in as early as 40,000 years ago, and proceeded not only to hunt and gather but to have lots of hot caveperson-on-caveperson sex with the pre-existing Neanderthals, whose genetic traces can be discerned in their descendants unto this very day.  Then, there was an agricultural society that came into Europe from what is now Turkey starting around 8,000 years ago.  Finally, some nomadic groups -- believed to be the ancestors of both the Scythians and the Celts -- swept across Europe around 4,500 years ago.

Anyone with European ancestry has all three.  Despite the genetic distinctness of different ethnic groups -- without which 23 & Me genetic analysis wouldn't work at all -- there's been enough time, mixture, and cross-breeding between the groups that no one has ancestry purely from one population or another.

Which, as an aside, is one of the many reasons that the whole "racial purity" crowd is so ridiculous.  We're all mixtures, however uniform you think your ethnic heritage is.  Besides, racial purity wouldn't a good thing even if it were possible; that's called inbreeding, and causes a high rate of homozygosity (put simply, you're likely to inherit the same alleles from both your mother and father).  This causes lethal recessives to rear their ugly heads; heterozygous individuals are protected from these because the presence of the recessive allele is masked by the other, dominant (working) copy.  It's why genetic disorders can be localized to different groups; cystic fibrosis in northern Europeans, Huntington's disease in people whose ancestry comes from eastern England, sickle-cell anemia from sub-Saharan Africa, Tay-Sachs disease in Ashkenazic Jews, and so on. 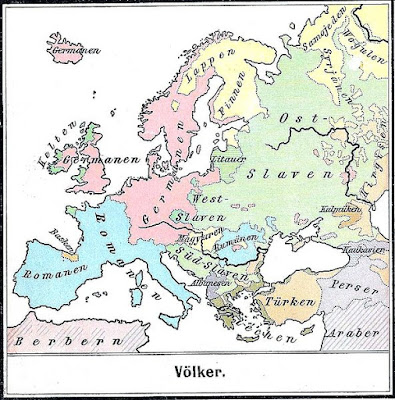 Map of ethnic groups in Europe, ca. 1899 [Image is in the Public Domain]

In any case, the current paper looks at the subset of Europeans who have a fourth ancestral population -- people in northeastern Europe, including Finns, the Saami, Russians, the Chuvash, Estonians, and Hungarians.  And they found that the origin of this additional group of ancestors is all the way from Siberia!


[T]he genetic makeup of northern Europe was shaped by migrations from Siberia that began at least 3500 years ago.  This Siberian ancestry was subsequently admixed into many modern populations in the region, particularly into populations speaking Uralic languages today.  Additionally... [the] ancestors of modern Saami inhabited a larger territory during the Iron Age.

The coolest part is that this lines up brilliantly with what we know about languages spoken in the area:


The Finno-Ugric branch of the Uralic language family, to which both Saami and Finnish languages belong, has diverged from other Uralic languages no earlier than 4000–5000 years ago, when Finland was already inhabited by speakers of a language today unknown.  Linguistic evidence shows that Saami languages were spoken in Finland prior to the arrival of the early Finnish language and have dominated the whole of the Finnish region before 1000 CE.  Particularly, southern Ostrobothnia, where Levänluhta is located, has been suggested through place names to harbour a southern Saami dialect until the late first millennium, when early Finnish took over as the dominant language.  Historical sources note Lapps living in the parishes of central Finland still in the 1500s.  It is, however, unclear whether all of them spoke Saami, or if some of them were Finns who had changed their subsistence strategy from agriculture to hunting and fishing.  There are also documents of intermarriage, although many of the indigenous people retreated to the north...  Ancestors of present-day Finnish speakers possibly migrated from northern Estonia, to which Finns still remain linguistically close, and displaced but also admixed with the local population of Finland, the likely ancestors of today’s Saami speakers.

Which I think is pretty damn cool.  The idea that we can use the genetics and linguistics of people today, and use it to infer migratory patterns back 40,000 years, is nothing short of stunning.

Unfortunately, however, I have zero ancestry in Finland or any of the other areas the researchers were studying.  According to 23 & Me, my presumed French, Scottish, Dutch, German, and English ancestry was shown to be... French, Scottish, Dutch, German, and English.  No surprise admixtures of genetic information from some infidelity by my great-great-grandmother with a guy from Japan, or anything.

On the other hand, I did have 284 markers associated with Neanderthal ancestry.  Probably explaining why I like my steaks medium-rare and run around more or less naked when the weather's warm.  Which I suppose makes up for my lack of unexpected ethnic heritage.