A few years ago, I wrote a piece in Skeptophilia about people who claim they're channeling the spirits of dead musicians, writers, and artists, so that we can get a chance to enjoy additional works by our favorite dead creative types.

So according to these folks, Beethoven is still composing, not just decomposing.

One of the folks I looked at in this post was Rosemary Brown (1916-2001), a British housewife who (despite little in the way of musical training) said she was writing -- if you believe her, a better word would be transcribing -- new works by Bach, Liszt, Chopin, and Debussy.  Some people have been extremely impressed, even baffled, by her ability; pianist Elene Gusch, who wrote a biography of Brown, said, "It would have been difficult for even a very able and well-trained composer to come up with them all, especially to produce them at the speed with which they came through."

Not everyone, however, is as taken with her compositions.  André Previn, conductor of the London Symphony Orchestra, said, "If the newfound compositions are genuine, they would best have been left on the shelf." 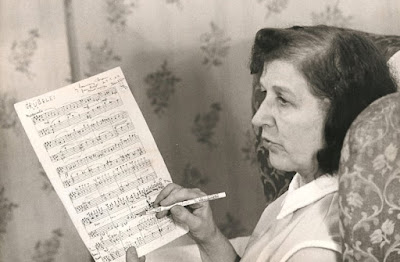 So this has been one of those enduring mysteries that the believers say is absolutely convincing and the scoffers say is a ridiculous false claim.  But until now, no one has tried to do any kind of rigorous analysis of her work (or, if you believe Brown's story, the very-posthumous works of Bach et al.).

Enter Carleton University Ph.D. student Érico Bomfim.  Bomfim has undertaken a detailed analysis of Brown's compositions, with the aim of finding out if there's enough commonality with known works by famous composers to be at all confident that there's something otherworldly happening here.

"She claimed to be in touch with the spirits of those composers," Bomfim said, in an interview with  CBC Radio's All In A Day.  "She claimed to be able to talk to them, and she said that they were dictating pieces to her...  It's certainly a possibility [that it's a hoax], and that's certainly what the skeptics think about it, but the thing is, she [wrote] one piece [in front] of the cameras when BBC was recording, and it's quite a complex piece."

Bomfim believes that Brown's lack of musical training supports the possibility that her claim was true.

"[S]he didn't seem to have a very deep musical knowledge," he explained. "She just had some piano lessons, she was not a trained composer.  So it's quite hard to believe that she would be able to write that kind of piece, especially if we keep in mind that it's close to Liszt's late style."

And she wasn't just able to mimic Liszt's style.  Bomfim said that her talent for writing in the styles of famous composers was uncanny.

"To reproduce so many styles [of classical music], that never happened... There's not any other case besides Rosemary Brown.  There are many musicians that are able to imitate styles, but mostly ... it's a humorous practice, playing Happy Birthday To You in Beethoven's style.  But those are trained musicians, and they didn't show themselves to be able to write lots of new musical pieces in lots of different styles...  Rosemary Brown's case is absolutely unique, and that's why I believe it really deserves close attention from musicology."

I definitely approve of Bomfim's general approach.  No claim should be rejected out of hand, although some of them can be rejected pretty quickly (as Christopher Hitchens put it, "What is asserted without evidence can be dismissed without evidence.").  Word-analysis software has become pretty good at figuring out who wrote passages of text using information such as word choice, word length distribution, and sentence structure; I know (much) less about any sort of musicological approach to the analogous question with compositions, but I would imagine the same sort of thing could be done there.

My intuition is that Rosemary Brown was a talented fake, or possibly simply delusional.  But intuition isn't evidence, and it'll be interesting to see what Bomfim comes up with.  And if it turns out that deceased composers are still writing music, no one will be happier than me.  For one thing, I hate that I've pretty much run out of new things to listen to by Shostakovich, Prokofiev, and Vaughan Williams.  For another, it would mean that my writing career won't be over when I kick the bucket.  It might be harder to find a publisher after I'm dead, but at least I might be able to find a competent medium to talk into being my locum.