He sees you when you're sleeping

I'll be taking next week off to spend some time with family, so there'll be a brief hiatus here at Skeptophilia HQ.  Posts will resume Monday, December 31, but I'll still be happy to receive any suggestions for topics while I'm on break!

So happy holidays to all who celebrate.  See you on New Year's Eve.

Ever heard of a tulpa?

I wrote about this (alleged) phenomenon a while back, so long-time readers of Skeptophilia might recall that it is when a bunch of people believe in a fictional character with sufficient fervor that said character becomes real.

Well, in some sense.  Even most true believers don't think they end up as flesh-and-blood, more that they can appear in spirit form (whatever that means when applied to a character that is fictional in the first place).  It all sounds like a lot of wishful thinking to me, although as a fiction writer, I can say with some certainty that I would very much rather the characters in my books not come to life.  There are a few I'd like to have a beer with, sure.  But most of them?

They can stay safely in the realm of the unreal, thank you very much.

Be that as it may, apparently there are now people who think that there's a tulpa who is around mostly at this time of year.  So I'm sure you can predict that who I'm talking about is...

No, I'm not making this up.  In an article over at Mysterious Universe, Brent Swancer tells us about a number of alleged sightings of Jolly Old Saint Nick.  And not to beat the point unto death, these people do not believe that they're seeing someone dressed up as Santa Claus; they think they've actually had a close encounter with the real guy.

The word real, of course, being used advisedly.  I don't want to steal Swancer's thunder, because his article is well worth reading in its entirety, but here's one such account, just so you can get the flavor of it.  A woman named Ana says she saw Santa when she was five years old, and the encounter was not exactly heartwarming:


He must have felt my presence because he turned around and looked at me.  He didn’t look jolly or kind and happy like you would expect Santa Claus to look.  He looked kind of eerie like he was staring into my soul.  Automatically, I ran into my parents’ room and hid under the covers.  I don’t know why I was so scared at the time, but I wrote it off as a dream for a while before I forgot about it completely.  Years later, I remembered it.  I thought it could have been a burglar, but when I asked my parents, nothing was ever missing from that apartment.  The only time we were ever robbed was when we moved later on.  The only explanation I have now is that it was some kind of apparition.

Of course, that's not the only explanation, but you knew I'd say that. 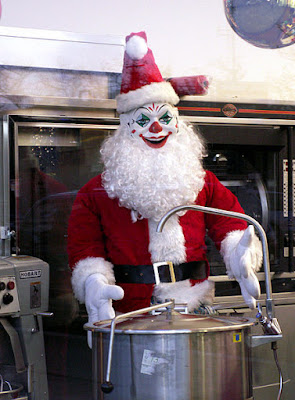 His eyes, how they twinkled!  His dimples, how merry!  [Image licensed under the Creative Commons Jackie, Evil clown Santa Claus, CC BY 2.0]

Loyd Auerbach, a "professor of parapsychology" over at Atlantic University, used the same verbiage to describe the accounts:


I’ve never even heard of people seeing Santa.  The Grim Reaper, yes, but not Santa.  The only possibility of this being real is if it’s an alien or a ghost pretending to be Santa.  We can’t investigate that.  There’s nothing we can do with that.

Um.  We could investigate it if it was the Grim Reaper, but not if it's Santa?  Or if it's not actually Santa, our only options are that it's an alien or a ghost impersonating Santa?

I think these people need to review the concept of "only possibility."

So anyhow, I think the main issue here is that if it were true, it doesn't exactly paint a reassuring picture of Santa Claus.  In fact, it gives kind of sinister overtones to lines like "He sees you when you're sleeping, he knows when you're awake," not to mention, "I saw Mommy Kissing Santa Claus."  It also gives me pause when I hear the stanza from "Up on the Housetop" that goes:


Next comes the stocking of Little Will
Oh, just see what a glorious fill
Here is a hammer and lots of tacks
Also a ball and a whip that cracks.

Is it just me, or does it sound like Little Will made his Christmas list to fill out the equipment in his My Very Own Li'l Tots S & M Dungeon?

Myself, I find the whole thing vaguely terrifying.  It's a good thing I think it's all a myth.  On the other hand, even if Sinister Santa is a real thing, he's still better than Krampus or the Giant Icelandic Christmas Cat, the Jólakötturinn, who comes out on Christmas Eve and eats bad children.

Which, for the record, I didn't make up.

So a lovely Christmas to all who celebrate, and best of luck avoiding evil Santas or humongous child-eating cats.  Also the Grim Reaper, for what it's worth.

Posted by Gordon Bonnet at 3:06 AM