As a fiction writer, I have to admit that my characters often feel very real to me.  I've said more than once that I feel like I'm getting to know characters more than I am inventing them, and there have been times that a story has taken off in an entirely new and unexpected direction because some character has seemed to grab the keyboard out of my hands and written him/herself a different part.

Despite that, I'm well aware that I'm indulging in a bit of whimsy.  I may not know what the source of creativity is -- for myself or for anyone else -- but that's a far cry from my thinking that Tyler Vaughan, the reluctant hero and cryptid-chaser from Signal to Noise, is really out there looking for Bigfoot in the Oregon Cascades.

That's a distinction that seems to have escaped Lucio Ballasteros, an 87-year-old writer from Ourense, Spain.  Ballasteros wrote a series of science fiction novels about a planet called "10/7" where a race "like humans but more highly developed" lives.  And he was so enamored of the idea that now Ballasteros has...

... built a spaceship to go to the planet himself. 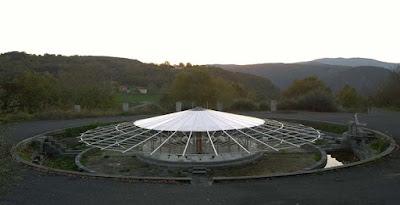 The spaceship, built of aluminum and methacrylate, has cost Ballasteros over 100,000 Euros (about $114,000) of his own money to construct, so he's nothing if not determined.  Also, the guy is 87, which makes it doubly impressive, because he's doing the building himself.  Me, I hope that when I'm 87 I have that kind of energy, although I also hope that I'll use it for something other than building a spaceship to fly to a planet that technically doesn't exist.

Ballasteros says you can find out a lot more about the project over at his site Despertar ("Wake Up"), although I'm afraid much of it was lost on me because my Spanish is kind of limited to "sí," "no," "gracias," and "una cerveza, por favor."  But I did find a translatable page about Ballasteros at the news site El Ideal Gallego, which was helpful, even though Google Translate does leave much to be desired.

Be that as it may, I found out that Ballasteros said that the construction is finished "except for some engines," which seems like kind of an important part.  He sounds a little unsure of whether he's ready to take off even if the engines are installed, however.  In order to go to 10/7, "Humanity would have to evolve psychically and spiritually."  And I have to admit, he's got a point.  I'm not sure our current state of affairs would be anything to brag to an advanced extraterrestrial civilization about.

He also said that the whole thing was going to be powered by several 280-watt solar panels.  Well, I did a little bit of figuring, using Ballasteros's estimate of the mass of his spaceship at 1,180 kilograms.  I assumed that "several" solar panels was five, which would mean the maximum power output is 1,400 watts.  (For comparison purposes. this is about the same power draw as twenty ordinary incandescent light bulbs.)  The escape velocity on the surface of the Earth is 11,186 m/s, so for a 1,180 kilogram spaceship, this would require the expenditure of 73,800,000,000 joules of energy.

Which his engines would have expended after 53,000,000 seconds or so, which is about a year and a half, assuming that 100% of the energy is used for the purposes of thrust.

I hope he's not in a hurry.

Oh, and if you're wondering why the planet is called "10/7," Ballasteros is happy to explain.  "The planet 10/7 is the planet God-Man, in which I projected myself when I was young and have lived," he says.  "It is attributed to the rebellion of the angels; God could have punished them temporarily on the planet 10/7, where 10 represents the unity of God and 7 represents the seven dimensions of the human being."

So I'm not optimistic about Ballasteros's chances of a smooth liftoff and safe arrival at 10/7.  But other than that, I suppose this falls into the "no harm if it amuses you" column.  And all in all, he seems happier messing about with his spaceship than I am, sitting here wondering whether Donald Trump is going to open the Seventh Seal of the Apocalypse before Congress can get off their asses and impeach him, or if he's simply going to sit around tweeting dick jokes about people he doesn't like as a way of showing everyone how presidential he is.

Which, honestly, makes me tempted to ask Ballasteros if he has room for a passenger.