It's been a while since we've seen a new salvo from the homeopaths, but I knew this did not mean they'd retreated in disarray.  After all, a belief in pseudoscientific woo-woo quackery means never having to say you're sorry.

The most recent news from the world of homeopathy comes from an online magazine called Clever H.  This is in many ways an unfortunate choice of names.  It immediately reminded me of "Clever Hans," a horse back in 1907 whose owner claimed he could do arithmetic.  Of course, the horse could do no such thing, but was shown by German psychologist Oskar Pfungst to be receiving cues from its owner.  Once the owner was taken off stage, suddenly Clever Hans lost his phenomenal ability to do calculations. 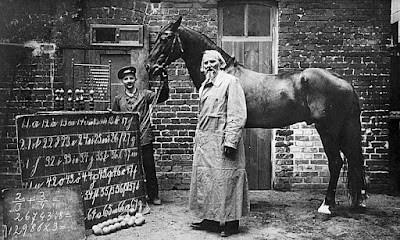 Clever Hans and his owner [Image is in the Public Domain]

So calling the magazine a name that recalls a debunked false claim isn't so much unflattering as it is ironic.  Apparently unaware of this, the writers are boundless in their enthusiasm, subtitling Clever H as "The Mag by Homeopaths, for Homeopaths, With the Patient in Mind!"  The article that caught my attention was called "The Anti-Aging of Homeopathic Cell Salts," which I at first thought meant they'd discovered a way to keep salt from aging.

Which, as far as I've heard, is not really a big problem.

But that isn't what the article's about.  It claims that they've discovered some chemicals ("cell salts") that can prevent, or even reverse, aging.  The authors write:


Tissue Salts are an off shoot of homeopathy and are vital elements that correspond to the same minerals our cells are made of.  These “vital elements” will nourish and rebuild your cells...   [A] homeopathic treatment that can be helpful in slowing the aging process and reducing the early signs of aging is a homeopathic detox of the liver, kidney and lymphatic system.  This will stimulate your body to function better.  A noticeable difference will be seen on the skin’s appearance and even aches and pains will improve.  When the lymphatic system is functioning at its best, weight loss and cellulite will be in control and the immune system will be functioning optimally.

Equipped with such homeopathic anti-aging secrets, the aging process can be slowed and life can be lived to the fullest beyond the days of youth.

Now, at the age of 58, no one would be happier than me to find there was a way to reverse aging.  (Physical aging, I mean.  My emotional age kind of plateaued around age 13, which is why I still laugh at fart jokes.)  On the other hand, I'm not so fond of the gray hair, wrinkles, and miscellaneous aches and pains, and would thrilled if I could return to the physique I had when I was 25.

What Clever H says we should do is take the homeopathic concoctions "calc fluor," "calc phos," and "kali phos," because all of these are valuable "cell salts" that will have the effect of restoring your youth.  Oh, and also "nat mur," which is a "water distributor."  Which, I suppose, is better than having water pool in our feet, or something.

So I did some research -- if you can dignify it by that name -- and found out that "calc fluor" is useful for treating hemorrhoids, "calc phos" restores health after an injury, "kali phos" is good for stress, and "nat mur" keeps you from drying out.  "Nat mur," I also found out, was made from plain old salt, so I was curious as to why they were making such a big deal about it.  In searching for an answer I stumbled upon a page about "nat mur" on the site of the British Homeopathic Organization, which had some information that was puzzling, to say the least:


The higher organisms, the mammals, require sodium chloride in comparatively large amounts.  It is clear that as life evolves to higher forms, and the faculties of perception and feeling unfold, the role of sodium chloride in psychological and biological functions becomes increasingly important.  The active secretion of salt through the urine, sweat and tears appeared in parallel with the development of feeling and the tender emotions.

So I'm supposed to develop tender emotions when I'm taking a piss?  Or am I missing some vital piece of the argument, here?

We also find out there are "nat mur" personalities, which are characterized by harshness, resentment, and lack of demonstrative emotions.  Because of the ocean or something.

Which for most of us qualifies as "really fucking dilute," but those of you who know some chemistry might recognize that this dilution far surpasses Avogadro's Limit -- because once you have done a 1-in-10 serial dilution 23 times, you have (on average) one molecule of the original substance left.  Any further dilution, and you essentially have nothing there but the inert carrier.

Not that the original substance does what the homeopaths say it does in the first place.  But considering that they claim that the more dilute a substance is, the stronger it is, I'm not sure we should be splitting scientific hairs, here.

If you paw around the Clever H site, you find the following disclaimer:


All content on this website is intended as an adjunct to, not a substitute for professional homeopathic and/or medical care.

No publication of Clever H. or its sub-pages should be interpreted as a means of diagnosis or treatment for any disease or condition, and the articles published at Clever H. by no means claim completeness of information.

For a medical diagnosis or treatment a licensed medical professional should be consulted. Homeopathic treatments should only be undertaken under direct guidance and care of a professionally trained Health Care Professional specialized in the services described.

Maybe it's just me, but "A noticeable difference will be seen on the skin’s appearance and even aches and pains will improve.  When the lymphatic system is functioning at its best, weight loss and cellulite will be in control and the immune system will be functioning optimally" sure sounds like a recommendation for a "treatment of [a] disease or condition."

I keep hoping that the homeopaths and other purveyors of pseudo-medical quackery will be so widely known for what they are that they'll go out of business, but (much as it pains me to admit it) homeopathic "remedies" are still on the shelves of our local pharmacy.  Including some that are 30x dilutions (or even more dilute, and therefore stronger).  This means that people are buying them, and using them in the hopes of treating conditions for which they should be seeking out legitimate medical care.  Bringing me back once again to the site What's the Harm -- wherein you will find that a lack of critical thinking skills, with regards to your own health, can be very, very dangerous.