It's interesting how the scientific version of urban legends can be incorporated into people's knowledge of how things work, and become so entwined that most folks don't even know which bits are true and which aren't.

Stephen Jay Gould riffed on this theme in his essay "The Case of the Creeping Fox Terrier Clone," which appeared first in Natural History and was later published in his essay collection Bully for Brontosaurus.  He looks at the claim that an early horse species, Hyracotherium, was "the size of a fox terrier" -- something that Gould found quoted in dozens of books on prehistoric animals (and which has therefore been used as a gauge of the animal's size in countless classrooms).  It turns out that it originated with a paleontologist, O. C. Marsh, who said Hyracotherium was the "size of a fox" -- a significant underestimate, as both foxes and fox terriers top out at around twenty pounds, and Hyracotherium weighed in at something closer to sixty.  But the analogy stuck, and people continued to pass it along without checking its veracity -- giving us the impression of tiny dog-sized horses, lo unto this very day.

Another example of this, from the same field, is that mammals were small, few in number, and low in biodiversity until along came a meteorite that for some reason selectively killed all the dinosaurs, leaving the mammals to throw a great big party and evolve like mad into the species we have around today.  This is incorrect on a variety of levels:
What Quental and Pires did is a thorough survey of mammalian fossils, analyzing biodiversity as a function of time in three of the four big lineages of mammals -- Eutherians (most of the mammals you're familiar with), Metatherians (marsupials), and Multituberculates (an odd group of rodent-like mammals that were only distantly related to the rest of Class Mammalia, and which were one of the most common groups of mammals for almost two hundred million years).  They didn't include the fourth lineage -- the Monotremes, or egg-laying mammals -- only because they are extremely rare in the fossil record. 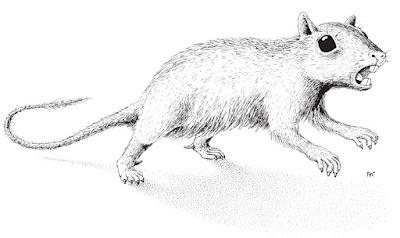 What they found -- predictably -- is that the dynamics of the extinction, and the years following it, is far more complex than it's usually represented.  "All these mass extinction episodes are heterogeneous," study co-author Pires said.  "They occurred for different reasons and unfolded in different ways.  Their impact on life forms was not absolute but relative.  Some groups suffered more, others less.  Some disappeared, while others took advantage of the new environmental conditions after the catastrophe to diversify rapidly."

Even within groups, the extinction didn't have uniform effects.  "Extinctions were concentrated among the specialized carnivorous metatherians and insectivorous eutherians," Pires said, "whereas more generalized eutherians and multituberculates survived and maintained higher diversity."

Which can more generally be summed up as "the simple explanation is usually wrong."  It'd be nice if things weren't so complex, especially for we non-scientists.  But like Gould's fox-terrier-horse, many of these oversimplifications are flat-out incorrect -- and the truth is so much more interesting.

Posted by Gordon Bonnet at 4:38 AM