Yesterday, I was listening to one of my favorite pieces by Claude Debussy, The Drowned Cathedral, and I started to wonder what legend had given rise to the piece.  After a little bit of digging, I found out that Debussy got his inspiration from the Breton legend of the mythical city of Ys, built on the coast of Brittany behind a seawall.  Princess Dahut the Wicked tempted fate by engaging in all sorts of depravity therein, despite the warnings of Saint Winwaloe that God was watching and would smite the ever-loving shit out of her if she didn't mend her ways.  (Okay, I'm paraphrasing a bit, here, but that's the gist.)  Anyhow, Dahut wouldn't listen, and one night a storm rose and broke through the seawall, and the ocean flowed in over the city.  Dahut's father, King Gradion, escaped on a magical horse with Dahut riding behind him, but Winwaloe shouted at him, "Push back the demon riding with you!"

So Gradion did what any good father would do, namely, he shoved his daughter into the sea, which "swallowed her up."  The sea also swallowed the rest of Ys, which kind of sucked for the inhabitants, given that it wasn't really their fault that the princess was a little morally challenged.  As for Princess Dahut herself, she became a mermaid, and is still hanging around to tempt sailors into jumping into the ocean to their deaths.  And according to legend, on windy days, you can still hear the bells of the drowned cathedral of Ys if you stand along the shore of Douarnenez Bay. 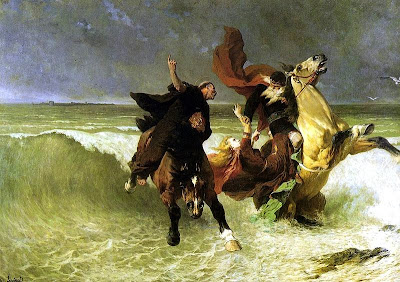 The Flight of King Gradion, by Évariste-Vital Luminais, 1884 (in the Musée des Beaux-Arts de Quimper, Brittany, France) [Image is in the Public Domain]

Kind of a cool story, in a ruthless, Grimm's Fairy Tales sort of way, even if Winwaloe and Gradion, not to mention God, do come across as pro-patriarchy assholes.  And whatever else you think, you have to admit that Debussy's piece is gorgeous (go back and give a listen to the recording of it I linked above, if you haven't already done so).

What I haven't told you, yet, though, is the other thing I found out while looking up the Legend of the Drowned City of Ys...

... which is that he über-Christians are now using the story to support creationism.

I'm not making this up.  If you don't believe me, check out the page called "Submerged Ruins" at the site Genesis Veracity Foundation.  Here's how they launch the idea:


Have you ever seen a map showing the bronze age port cities of the world? You certainly have not, because the darwinists will tell you sea level at circa 2000 B.C. was little different than today, yet the presence of hundreds of submerged ruins’ sites from the Gulf of Chambay to Bimini, and from Cornwall to Nan Madol, certainly belie that notion, with most of the submerged ruins worldwide in the Mediterranean and eastern Atlantic, right where you’d expect them to be, where Sidon, Peleg, Javan, Tarshish, and Atlas plied the waters, building their port facilities, now submerged since the end of the Ice Age.  Here is a partial list of the submerged ruins worldwide, with pictures where available, to be soon updated as more photos will undoubtedly roll-in from interested “submergie” aficionados, so help out if you can, hard as it may be for a darwinist to do, but certainly not for a soon-to-be ex-darwinist, we shall see.

Well, I've never known a "Darwinist" to make any definitive statement regarding the sea level staying the same.  Most "Darwinists" are pretty well-versed in science, meaning they know all about ice ages and interglacial periods and sea level fluctuations, as opposed to creationists, who think that the entire world was flooded and that afterwards the water just "went away," presumably through some kind of giant floor drain in the Marianas Trench.

Anyhow, we soon get to the legend of Ys, in a single-sentence paragraph that should win some kind of Olympic gold medal in the Comma Splice Event:


Submerged ruins have been reported off Cornwall’s Isles of Scilly, in Cardigan Bay, off Tory Island, and off the Brittany coast of the Kingdom of Ys, also known as Keris, all these submerged ruins part of Atland as it’s called in the ancient book Oera Linda of the Frisians, that empire was also known as Atalan, don’t bet against Avalon, the story adapted two thousand years later.

What on earth does this have to do with the bible, you may be asking?  Well, the writer is happy to explain with another single sentence:


So the popular notion that the empire of Atlantis was some continent-sized island now submerged way out in the Atlantic ocean is proven ridiculous, because that empire was demonstrably a vast ice age maritime empire of the western Mediterranean and eastern Atlantic coastlines, which comports with the biblical timeline, that the Ice Age ended circa 1500 b.c. at the time of the Exodus of the Jews out of Egypt to the land of the Canaanites, their patriarch having been Canaan, the father of Sidon (Posidon).

So, I was thinking, "Wait.  Is he talking about Poseidon?  Like, the Greek god?  Because, you know, polytheism doesn't exactly square with the traditional interpretation of the bible, right?"  But in fact, yes, that's who he's talking about... and he claims that Poseidon was mentioned in the bible:


Plato wrote that Posidon [sic] (Canaan’s son Sidon, Genesis 10:15) bestowed ten districts of atlantean empire governorship to his sons, one son Atlas having gained the kingship of the district of the concentric canal ringed city of Atlantis, his namesake (along with the Atlantic ocean and the Atlas mountains), that legendary capital city of Atlantis where the worship of Posidon [sic] was centered and practiced for perhaps forty generations until the Ice Age ended (when the sea level rose to consume 25 million square miles of coastal real estate worldwide).

Except that in the bible, Sidon was Noah's great-grandson, and was born after the Flood.

But creationists never let a little thing like facts stand in the way of their conclusions.  He finishes up his explanation, if I can dignify it by that name, thusly:


Very important to remember is that Noah’s Flood did not cover today’s mountain ranges (contrary to what the bibliophobes mockingly insist), because the global flood of Noah’s day totally covered and obliterated the low mountains of the pre-flood supercontinent Pangea [sic], those mountains not having been formed by tectonic plates crashing together by runaway plate tectonics as was the case for the orogenies of our current mountains ranges formed at the close of Noah’s Flood.  So now when skeptics come to comprehend the solid science confirming the global flood vividly described in the book of Genesis, solid science here http://detectingdesign.com/fossilrecord.html, the reasons to believe all of the Bible become even more apparent, much to the darwinists’ woe.

Yup, I have to admit that reading this made me experience some significant woe, but not for the reason he probably thinks.

Is it just me, or do the creationists seem increasingly desperate lately?  The evidence for evolution, the antiquity of the Earth, and the accuracy of paleontology just keeps mounting, and yet they continue to flail around, like a drowning citizen of Ys trying to cling to anything in order to stay afloat.  They've shifted their tactics from "The Bible Says It, I Believe It, and That Settles It" -- which is an inherently unarguable position -- to looking at the actual evidence.  And that moves the game solidly onto our turf, because evaluating evidence is what scientists do.

So I suppose sites like this, however they are kind of an embarrassment to read, are actually a good thing, because it means that on some level, the biblical literalists are sensing that they're losing.

And in celebration, let's indulge in a little more Debussy, shall we?  How about his orchestral work, The Sea?  That seems a fitting way to end this discussion, doesn't it?