Whatever else you can say about the woo-woos, you have to admit that they have the courage of their convictions.

Once they have settled on a favorite idea, they hang onto it with a death grip.  Nothing -- not the most convincing evidence, the most logical argument, the most precise data -- will budge them one millimeter.

I ran into two especially good examples of this in the last couple of days.  They both leave me feeling torn between frustration at their pig-headedness and a grudging admiration for their tenacity.

In the first, which I was alerted to by a loyal reader of Skeptophilia, we learn that the Flat-Earthers (hereafter referred to as "Flerfs") are planning a trip to Antarctica... so they can see first hand the "ice wall that holds back the oceans."  The FEIC (Flat Earth International Conference) calls it their "biggest, boldest adventure yet."

There's just one problem with this, if you exclude the obvious one that anyone who believes the Earth is flat would have to have the IQ of a peach pit.  In order to get to Antarctica, they're going to be aboard a ship, and if the ship has even a passing chance of getting to its destination, it has to use GPS, and the GPS system...

... assumes the Earth is spherical.  Remember, after all, what the "G" in "GPS" stands for.

Unless somehow they are able to convince the ship's captain to navigate based upon the assumption that the Earth is a flat disk, in which case the U. S. S. Flerf will probably never be seen again.

I would hope, of course, that the captain would nix any efforts by the Flerfs to plot their course based on the dimensions and orientation of a disk.  Captains are usually fairly particular about having their ships not get lost or run aground or sail around in circles, not to mention having a bunch of landlubbers telling them what to do.  So I suspect that the captain will tell them to buzz right off and use his GPS, and let them have their silly fun when they get there and declare victory regardless what else happens (which you know they will).

In our second story, we have the reappearance of a woo-woo who you'd think would not be willing to show his face in public after being publicly humiliated by Johnny Carson on the Tonight Show.  I'm referring, of course, to Israeli "mentalist" Uri Geller, who was invited to do his psychic spoon-bending shtick on live television.  But Carson, who had been a stage magician himself and knew all the tricks, did not give Geller access to any of the props beforehand.

What happened afterward was almost painful to watch.  I absolutely hate seeing someone making a complete and utter fool of himself, and even the most generous of folks couldn't see Geller's performance in any other light.  To put it bluntly, he got his ass handed to him.  After failing to bend any spoons, he told Carson he "wasn't feeling strong" that night.  And his inability to psychically detect objects hidden under cups mysteriously vanished, which Geller attributed to the "atmosphere of suspicion and distrust" that Carson was creating. 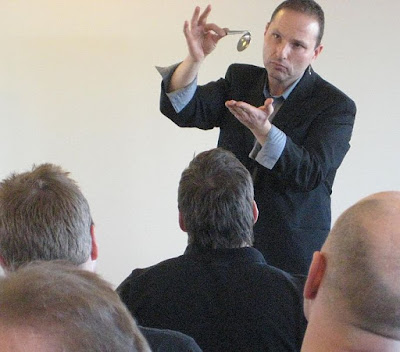 It's surprising, honestly, that he was willing to go on the show at all; he had to have known what was going to happen.  Maybe by that time, he was so cocky that he figured he'd be able to wing it and still come out okay.  But the demonstration, in front of a live audience and beamed out live to television watchers worldwide, went on, and on... and on and on.  Geller just wouldn't give up.  I found myself squirming in discomfort after five minutes; I can't imagine what it was like to be him, sitting there, unable to do a thing to get out of the hole he'd dug for himself.

If this had happened to me, I don't know if I'd have ever been willing to stick my nose outside my front door again.  But Geller not only got past the embarrassment, somehow, he's actually continued to claim psychic abilities -- and perform his nonsense in front of sold-out crowds.

But now, he's topped any of his previous exploits, because last week Geller announced that he was personally going to stop Brexit -- by telepathically controlling British Prime Minister Theresa May.

Most Brits, Geller says, are against Brexit, a conclusion he has come to "psychically and very strongly."  So he can't let May and her supporters lead the UK out of the European Union.  In an open letter to May, Geller wrote, "I love you very much but I will not allow you to lead Britain into Brexit.  As much as I admire you, I will stop you telepathically from doing this -- and believe me I am capable of executing it.  Before I take this drastic course of action, I appeal to you to stop the process immediately while you still have a chance."

So that's pretty unequivocal.  But what's the most frustrating about all of this is that no matter what happens, Geller won't lose a single audience member.  If Brexit falls apart (whether or not May herself is the cause), he'll claim that his psychic powers are what did it.  If the UK follows through and leaves the EU, he won't mention it again -- and the woo-woos will conveniently forget it ever happened, just like every other time a psychic has had a conspicuous failure.

As I've pointed out before, you can't win.

But like I said, you have to almost admire their stubbornness.  It reminds me of the quote from Bertrand Russell -- "The whole problem with the world is that fools and fanatics are always so certain of themselves, and wise people so full of doubts."

So look for updates from the Flerf mission to Antarctica and Uri Geller's attempt to stop Brexit with his mind.  Me, I'm not expecting much.  But I guess it all falls into the "No Harm If It Amuses You" department.