In today's post, I'm going to ask a question, not because I'm trying to lead people toward a particular answer, but because I don't know the answer myself.

The topic comes up because yesterday was Johann Sebastian Bach's 334th birthday, and the classical radio station I frequently listen to had an all-Bach-all-day program.  I approve of this, because I love Bach's music, and have done since I first discovered classical music when I was twelve years old.

The radio was playing one of Bach's (many) religious cantatas, which was gorgeous, but it started me thinking about one of his masterworks -- the St. John Passion.  And that's when I started to feel uneasy, because there are passages in the St. John Passion that are decidedly anti-Semitic.

The gist is that the villains of the piece are the crowds of Jews who demand Jesus's crucifixion, and who are depicted as deliberately rejecting the claim that Jesus was the Messiah.  (Which, I suppose, they did, if you accept the biblical account as historical.)  But it's obvious that the Jews are being cast in a seriously negative light.  This is consistent with Martin Luther's theology, which was even more clearly and virulently anti-Semitic.  And Bach, after all, was a devout Lutheran. 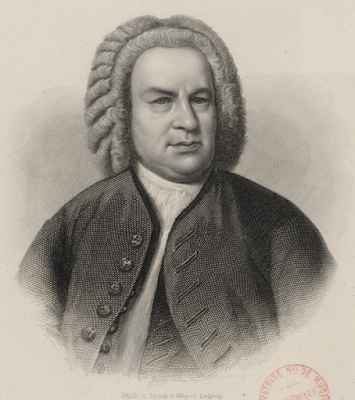 On the other hand (and you'll find there are several hands, here), even the powers-that-be of the time didn't condone maltreatment of Jews based on the biblical accounts and the St. John Passion specifically.  The senate of the city of Hamburg, for example, issued an official proclamation in 1715 that, relative to performance of Bach's piece at Easter, "The right and proper goal of reflection on the Passion must be aimed at the awakening of true penitence…  Other things, such as violent invectives and exclamations against… the Jews… can by no means be tolerated."

The fact that they had to state that outright, however, certainly is indicative that there's something to the claim that the Passion is by its nature anti-Semitic.  And that got me to thinking about the relationship between a creator and his/her work -- and to what extent the opinions and behavior of the creator can be kept separate from the worth of the work itself.

Other examples come to mind.  H. P. Lovecraft, whose horror stories were a near-obsession when I was a teenager and who to this day influences my own fiction writing greatly, was an unabashed racist -- something that comes out loud and clear in stories like "The Horror at Red Hook" and (especially) "Facts Surrounding the Late Arthur Jermyn and his Family."  The best of his stories -- gems like "The Colour Out of Space" and "The Shadow Over Innsmouth" -- are largely free of the ugly racism he apparently embraced, but in his case, saying "He was a man of his times" only goes so far, and after discovering his bigotry I've read Lovecraft with some serious misgivings.

Orson Scott Card's homophobia is another good example, although I must say I wasn't that fond of Card's fiction even before I found out about his anti-LGBTQ stance.  Even Tom Cruise, whose loony defense of Scientology makes me wonder if he is sane, is undeniably a good actor -- Minority Report and Vanilla Sky would be in my top-ten favorite movies.  But I can't watch him without remembering him losing his mind and leaping about on Oprah Winfrey's couch.

The truth is that keeping the creator and the creation separate is at best an exercise in mental gymnastics.  On the most venial level, authors like myself need to be careful about our public personae, because that (after all) is the brand we're trying to sell.  (It's why I try to keep the vehemence-level down in any postings I make about politics on social media -- a difficult thing, sometimes.)  But it goes deeper than that.  Even if our own ugly opinions or weird personality quirks don't explicitly leak out onto the page, they're part of us, and therefore part of what we create.  Separating the two is nearly impossible -- at least for me.

So we're back to where we started, with the question of how a person's flaws color the perception of their work.  And I honestly don't know the answer.  I'm sure I'll still continue to listen to Bach -- and continue to be inspired by Lovecraft's ability to tell a bone-chillingly scary story -- but there will always be a twinge of conscience there, and probably there should be.