A couple of days ago I broke my cardinal rule -- arguing with strangers about politics on the internet -- when someone posted a snarky reply to a comment I'd made on Twitter.

The comment was about a recent story featuring the spectacularly out-of-touch-with-reality Rush Limbaugh, wherein he said that liberals staged the shootings in New Zealand to make conservatives look bad.  The exact quote is, "There's an ongoing theory that the shooter himself may in fact be a leftist who writes the manifesto and then goes out and performs the deed purposely to smear his political enemies."  Interestingly, Limbaugh admits this claim is too bizarre even for Fox News: "[I]f that's exactly what the guy is trying to do then he's hit a home run, because right there on Fox News: 'Shooter is an admitted white nationalist who hates immigrants.'"

There are a couple of things that came to my mind when I heard about this, the first of which is that the word "theory" doesn't mean "some random idea I pulled out of my ass just now."  But that's a minor point, really.  The other thing that crosses my mind is that it's telling that Limbaugh thinks posing as a white-supremacist wacko and shooting immigrants would make conservatives look bad.

But anyhow, after I saw this story posted on Twitter, I responded, "It will be a good day when anyone who makes a statement like this is immediately shouted down."

Well.  You'd swear I just suggested violently overthrowing the government, or something, judging by the responses.  The one that stood out, though, was a guy who said, "Just like a liberal.  To hell with free speech.  If someone disagrees with you, they deserve to be silenced by whatever means necessary."

Which is packing a lot into a small space.  First, I wasn't saying Limbaugh should shut the hell up because I disagree with him on political matters, but because he had (1) made a claim that was demonstrably false, and (2) encouraged the beleaguered siege mentality that's becoming increasingly common on the Right.  And nowhere did I say he deserved to be "silenced by whatever means necessary."

But the most important point is that he seems to believe that free speech means you can say whatever you want with zero consequences.  Free speech refers to your right to state your opinion; it doesn't mean that you have a right to avoid the repercussions. 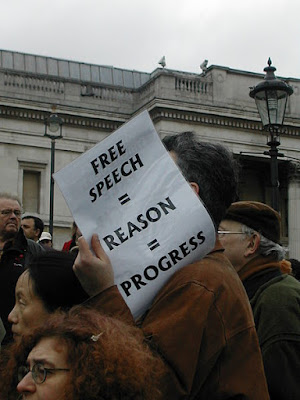 As a simple example, consider people who've made disparaging comments about their bosses on social media, and gotten fired.  Sure, it was entirely within their rights to say what they said.  But the boss was also entirely within his/her rights to fire the employee.  What this guy seems to be claiming is that people bear no responsibility for the results of their actions -- odd since most conservatives claim to support personal responsibility.

To quote physicist and writer Brian Cox: "The problem with today's world is that everyone believes they have the right to express their opinion and have others listen to it.  The correct statement of individual rights is that everyone has the right to an opinion, but crucially, that opinion can be roundly ignored, and even be made fun of, particularly if it is demonstrably nonsense."

This is exactly the situation with Limbaugh's case; the logical consequence of publicly uttering a ridiculous statement is that he'll be ridiculed.  What I was saying is that it'd be nice if everyone hearing such dangerous fiction would recognize it as such and respond by telling him to shut up -- and by extension, encouraging his sponsors to stop advertising with him.  This isn't a curtailment of free speech.  It's the natural result of being an asshole.  In a fair world, you get your public forum taken away.  You're still free to say whatever you like; it's just that no one's listening any more.

After all, there's no such thing as "conservative truth" and "liberal truth."  There's only the "truth," and it'd be nice if more people on both sides of the aisle cared about it.

But honestly, I should have known that posting on Twitter, and then (worse) responding to someone who objected, was a fruitless pursuit.  The exchange didn't change either of our minds, it just resulted in two people being even more pissed off than before.  This is the danger of social media -- it tends either to turn into a battleground or an echo chamber, neither of which is conducive to change.

A lesson Donald Trump has yet to learn.

So I'm once again making the decision not to get in online arguments with strangers.  I just don't have the energy or patience for it.  I'll continue to try to facilitate change where I can -- such as writing here at Skeptophilia -- but I've recognized a losing battle for what it is.