Some days it seems like it would be a good move to get off social media altogether.

This is largely because I'm so easily pissed off.  Fortunately, at least I've learned the "don't argue with people on the internet" rule, but the "just keep scrolling and don't worry about it" rule hasn't sunk in very well yet.  I ran into a good example of this yesterday, with a conversation that showed up on my Facebook feed that left me fuming for a couple of hours afterward.  It started as follows:


This is a good brief overview that explains how and why human emissions of carbon dioxide are not causing catastrophic climate change. I have been also explaining the same points made in the article to anyone who would listen for the past 10 years.

He then included a link to an article by David Legates, professor of geography and climate science at the University of Delaware, called, "It's Not About the Climate -- It Never Was."  In it, Legates makes a variety of points, including that the climate is not sensitive to carbon dioxide concentration, that a warmer Earth will not generate more numerous or intense weather events, and that higher carbon dioxide concentrations (and a global temperature increase) will be beneficial to the human race and the global ecosystem.

To say Legates is a biased witness is a statement of mammoth proportions.  He's affiliated with the Cornwall Alliance for the Stewardship of Creation, an evangelical group known for rejecting claims of anthropogenic climate change which has been accused of being a "front group for fossil fuel interests" because of its ties to Committee for a Constructive Tomorrow, which is directly funded by Exxon-Mobil and Chevron.  To give you a flavor of the Cornwall Alliance's philosophy, here's a direct quote from one of their publications:


The world is in the grip of an idea: that burning fossil fuels to provide affordable, abundant energy is causing global warming that will be so dangerous that we must stop it by reducing our use of fossil fuels, no matter the cost. Is that idea true? We believe not. We believe that idea – we'll call it "global warming alarmism" – fails the tests of theology, science, and economics.

The fact that they put theology first -- hell, that they included it at all -- should tell you all you need to know. 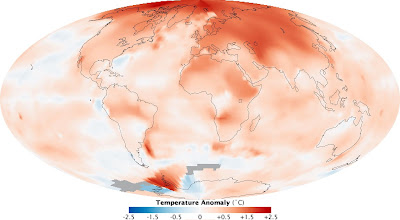 [Image is in the Public Domain, courtesy of NOAA]

Anyhow, Skeptical Science and Climate Science Watch did a good job of taking apart Legates's claims piece by piece, and that's not what I'm here to do.  To get back to the original post -- claiming that Legates is correct and he (the original poster) has been "explaining the same points... for ten years," there were the following replies:


Courageous of you, and I say good job, T____, with posting something that flies in the face of the prevailing face of leftist ideologues -- calling anyone, for example, climate change deniers, which is a reprehensible things [sic] to accuse someone of who has a different opinion that the Neo-Puritanical leftist ideologues -- of the West.  Thousands of scientists disagree with Obama and Leftists on this subject.

The Green New Deal ...now that is pseudo science. Stop cow farts and spend 4x a countries GDP.  Outstanding how a 29 year old bartender could have that drafted and ready so quick.

Kudos T____ for speaking up on your beliefs based in reality.  Even one of the founders of Greenpeace says ita [sic] a sham.

And so forth and so on.

One of the most maddening things about all of this is how the climate change deniers (okay, I guess that makes me reprehensible -- so be it) set up straw man claims and easily identified biased, cherry-picked statistical arguments, and all the people who would very much like us not to have to change what we're doing just go, "Yup.  That's the truth.  I knew it all along."  The thing is, there is consensus among climatologists, notwithstanding what a handful of rogues like Legates have to say.

And being a rogue is not somehow noble, or courageous, or realistic.  Sometimes when you're flying in the face of consensus, you're simply wrong.  Here, there are mountains of data supporting the connection between fossil fuel use and carbon dioxide levels, between carbon dioxide and climate, and between climate change and increasingly violent weather extremes.  I don't see any way that a truly unbiased individual could evaluate the evidence and not make those connections.

So Legates is obviously biased.  Why is a matter of conjecture, whether it's simple confirmation bias or something more sinister.  (If you still doubt this, go back to the Climate Science Watch article that I linked above, which is well worth a read -- and ends with slamming Legates for "uncritical reiteration of tired and discredited criticisms.")

But again, it's not that I didn't know there were climate change deniers.  Hell, the White House is home to one of 'em.  It's the association of science -- based on hard evidence -- with "leftist ideology," as if climate data had a political opinion, that really torques me.  Even more, labeling this kind of biased pseudoscientific diatribe as "courageous" makes me want to hurl a heavy object across the room.

So honestly, I should probably get off social media, or at least severely curtail how much time I spend on it.  Probably good advice for a lot of us, for a variety of reasons.  Right now the chief of which is that I really don't need anything to make my blood pressure higher.  I've got enough to worry about, such as whether Donald Trump is going to open the Seventh Seal of the Apocalypse before or after he's indicted.  The last thing I want is to add infuriating Facebook posts to the list.