One of the guiding principles of teenagerhood is "I want to be unique, just like everyone else."

Not, mind you, that I'm criticizing efforts toward individuality.  We all have to find a way to express ourselves, be it how we dress, talk, or style our hair.  But what's always struck me as funny is how the drive to be different often pushes people toward the same solution, creating stereotypical pseudo-rebellious subcultures that are often parodied because they all on some level look and act alike.

This subject has been the focus of mathematician Jonathan Touboul, of Brandeis University, who looks at how information transfer through societies affects behavior.  And he's been studying something he calls the "hipster effect" -- that rejecting conformity simply drives people to conform to something else.  Even more interesting, he's found that these patterns of synchronization have parallels in how many other systems interact, in areas as different as neural firing patterns and reactions by investors to information about the stock market, and may well be describable by the same mathematical model. 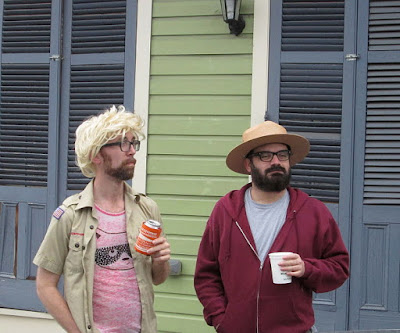 In his paper "The Hipster Effect: When Anticonformists All Look the Same," which appeared in the online journal arXiv, he has the following to say:


In such different domains as neurosciences, spin glasses, social science, economics and finance, large ensemble of interacting individuals following (mainstream) or opposing (hipsters) to the majority are ubiquitous.  In these systems, interactions generally occur after specific delays associated to transport, transmission or integration of information.  We investigate here the impact of anti-conformism combined to delays in the emergent dynamics of large populations of mainstreams and hipsters.  To this purpose, we introduce a class of simple statistical systems of interacting agents composed of (i) mainstreams and anti-conformists in the presence of (ii) delays, possibly heterogeneous, in the transmission of information.  In this simple model, each agent can be in one of two states, and can change state in continuous time with a rate depending on the state of others in the past...  [W]hen hipsters are too slow in detecting the trends, they will consistently make the same choice, and realizing this too late, they will switch, all together to another state where they remain alike.  Similar synchronizations arise when the impact of mainstreams on hipsters choices (and reciprocally) dominate the impact of other hipsters choices, and we show that these may emerge only when the randomness in the hipsters decisions is sufficiently large.  Beyond the choice of the best suit to wear this winter, this study may have important implications in understanding synchronization of nerve cells, investment strategies in finance, or emergent dynamics in social science, domains in which delays of communication and the geometry of information accessibility are prominent.

Which is kind of cool.  Although it's a little humbling to think that our choices about how to express who we are, which feel so important and deeply personal, can be emulated by a simple mathematical model that works equally well to describe how nerves fire and how investors make their stock trading decisions.

What's funniest is the outcome when Touboul tried to model a population with equal numbers of conformists and hipsters.  It resulted in a seesawing oscillation between different outcomes -- for a while the hipsters have beards and the conformists don't, but if you wait for a while, the reverse becomes true.

Of course, life is usually more complex than a bunch of binary choices.  But when this is the situation, the result is remarkably predictable.  "For example, if a majority of individuals shave their beard," Touboul said in an interview with Technology Review, "then most hipsters will want to grow a beard, and if this trend propagates to a majority of the population, it will lead to a new, synchronized, switch to shaving."

Touboul wants to expand his model to include choices where there are more than two options, and see if it continues to emulate observed trends in social dynamics.  My guess is it will, although I don't begin to understand how you'd manage the mathematics involved.  As for me, I've got to look around and count the number of guys with facial hair, and decide whether I should shave off my beard.  You know how it goes.