Yesterday, we looked at the Flat Earthers who would rather doubt a twenty-thousand dollar piece of precision scientific equipment than their own guesses about how the world works.  Today, in further adventures of confirmation bias and wishful thinking, we have:

The Loch Ness Monster is back.

Of all the cryptid legends, the Loch Ness Monster is (in my opinion) one of the least likely.  The cryptid-seekers go on and on about how any and all cryptids could exist because we've rediscovered animals that were thought to be extinct.  This usually involves bringing out the coelacanth, which was presumed dead for the last sixty-odd million years, that was shown to be alive when someone caught one off the coast of Madagascar.

Coelacanth [Image is in the Public Domain]

Even if you accept that there are animals out there that we haven't successfully captured, Nessie is a poor bet.  Up until about 14,000 years ago, Scotland was entirely covered by a thick sheet of glacial ice, so if there had been a plesiosaur that somehow escaped the extinction event that killed all of his cousins and survived in a lake up to then, during the Pleistocene Epoch he would have been turned into a plesiosicle.  Plus, Loch Ness is oligotrophic -- nutrient-poor -- and therefore has a fairly small population of fish and other animals, pretty certainly not enough to support a breeding population of large aquatic dinosaurs.

So Bigfoot, yeah, okay, it's at least possible.  Not likely, mind you, but possible.  Nessie?  Not so much.  The evidence thus far brought to bear upon the question is far insufficient to prove the case -- and that's even the opinion of Adrian Shine and Steve Feltham, two of the foremost "Nessie hunters" in the world.

"The fact is that well over a thousand honest and sober people have seen monsters in Loch Ness," Shine said.  "Yet over eighty years of expeditions have failed to find them.  Either we’re fairly bad at what we do or there’s another reason for that...  I think it’s fair to say we’d all like there to be a Loch Ness monster.  But equally there are people who will see what they want to see."

That, of course, hasn't stopped enthusiasts.  And you can expect the whole craze to be ramping up over the next few weeks, because there have been two sightings of Nessie in the last month that have enthusiasts leaping about making excited little squeaking noises.

So naturally, I thought I'd look into it further.  Open mind, and all.  I was even more intrigued when I found out that one of the people who claimed a sighting, Eoin O'Faodhagain, had taken a still shot from the "Nessie cam" that's always pointed out across the lake, and it was alleged to have caught a good view of the monster.

Nota bene: I have no idea how to pronounce Eoin O'Faodhagain.  A Scottish friend once told me, "There are only two rules for pronouncing Gaelic names.  Unfortunately, no one knows what they are."

Anyhow, I thought I'd take a look at O'Faodhagain's photograph, which has evidently caused a considerable stir in the cryptozoological community.  So... ready?  Here it is: 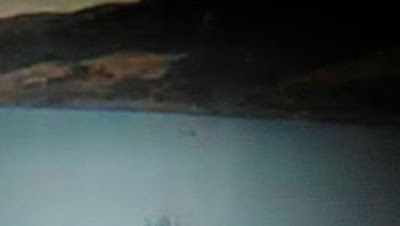 And I'm thinking: "that's it?  That's your earthshattering photo?"  Hell, it's so blurry that he even had to circle the vague gray blob that we're supposed to think is Nessie because otherwise we wouldn't have been able to find it.  Oh, but O'Faodhagain says it has to be Nessie, because as he watched it disappeared, and "boats don't do that."

In any case, here we have another discussion over something that -- if I may borrow a phrase from Dorothy Parker -- is such slim evidence that to call it wafer-thin would be to insult wafer-makers the world over.  Not that I expect this to discourage Nessiphiles.