Before you jump to a wild explanation for something, it's a good idea to rule out prosaic explanations first.

Take, for example, the strange deity Bep Kororoti, worshiped by the Kaiapo tribe of Brazil.  Erich von Däniken and his ilk just love this god, and when you see a photograph of someone wearing a Bep Kororoti suit, you'll understand why: 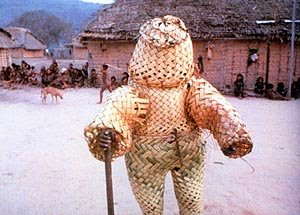 In his book Gold of the Gods, von Däniken says that this is clear evidence of contact with an alien wearing a space suit:


João Americo Peret, one of our outstanding Indian scholars, recently published some photographs of Kaiapo Indians in ritual clothing that he took as long ago as 1952, long before Gagarin's first space flight...  I feel that it is important to reemphasize that Peret took these photographs in 1952 at a time when the clothing and equipment of astronauts were still not familiar to all us Europeans, let alone these wild Indians!...  Yuri Gagarin orbited the Earth in his spaceship Vostok I for the first time on April 1961...  The Kaiapos in their straw imitation spacesuits need no commentary apart from the remark that these 'ritual garments' have been worn by the Indian men of this tribe on festive occasions since time immemorial, according to Peret...

Nope.  No commentary needed.  No questions, either.  Consider how this shows up on the dubiously credible site Message to Eagle:


The inhabitants of the Amazon jungle, the Indians Kaiapo [sic] settled in the State of Pará in northern Brazil, have detailed legends of sky visitors, who gave their people wisdom and knowledge.

The Kaiapo Indians worshipped in particular one of these heavenly teachers. His name was Bep Kororoti, which in Kayapo [sic] language, means "Warrior of the Universe"... It is said that his weapons were so powerful that they could turn trees and stones into dust.

Not surprisingly, his aggressive warrior manners terrified the primitive natives, who at the beginning even tried to fight against the alien intruder.

However, their resistance was useless.

Every time their weapons touched Bep Kororoti's clothes, the people fell down to the ground.

Eventually Bep calmed down, we find out, and began to teach the Kaiapo all sorts of stuff.  He also had lots of sex with Native women, apparently while still wearing his space suit, and today's Kaiapo claim descent from him.

The whole thing has become part of the "Ancient Aliens" canon, and even was featured on the show of the same name (narrated, of course, by the amazingly-coiffed Giorgio Tsoukalos).

So anyway.  The whole thing boils down to the usual stuff.  You have a god coming down from the sky, dispensing knowledge (and various other special offers) to the Natives, then returning from whence he came.   Evidence, they say, that the Kaiapo were visited by an alien race in ages past.

All of this, however, conveniently omits one little fact.  Probably deliberately, because once you point this out, the whole thing becomes abundantly clear.  Writer and skeptic Jason Colavito found out that not only did Bep Kororoti live in the sky and come visit the Kaiapo...

... he was the protector spirit of beekeepers.

For reference, here's a drawing of some traditional beekeepers, done by Pieter Brueghel the Elder in 1568: 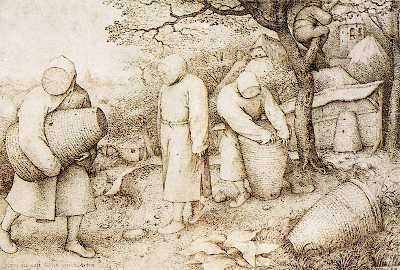 Notice a similarity? Yeah, me too.

I know we all have our biases and our favorite explanations for things.  But when you deliberately sidestep a rational, Earth-based explanation for one that claims that damn near every anthropological find is evidence of ancient astronauts, you've abandoned any right to be taken seriously.