It's always entertaining when the woo-woos start running experiments or collecting actual data, because that moves the argument into the realm of testable science.

It happened with homeopathy (homeopathic remedies don't work), anti-vaxx (vaccines don't cause autism), and astrology (horoscopes rely on dart-thrower's bias, and when that's controlled for, show zero accuracy).  So it's kind of inadvisable to play that game and think they're going to win -- much better to stick with "I believe this because it sounds right."

This is a lesson the flat-Earthers ("Flerfs") have yet to learn, judging by a recently-released Netflix documentary called Behind the Curve, in which some dedicated Flerfs spent a huge amount of money on a highly sophisticated ring laser gyroscope, determined to show that the Earth is flat and does not rotate -- and ended up proving the opposite.

Gyroscopes are a particularly good tool for this kind of study, because they have an interesting property -- they exert a force to resist changing their axis of rotation.  I remember being in high school physics and playing with a bicycle wheel gyroscope.  I spun the wheel, and sat on a lab stool -- when I tried to change the angle of the axis of rotation, it actually made the lab stool rotate so the axis remained parallel to where it was when it started.

And that was a low-tech gyroscope that wasn't even spinning very fast.  Ring laser gyroscopes use a beam of polarized light instead of a spinning wheel, and have an accuracy to within less than a hundredth of a degree shift per hour. 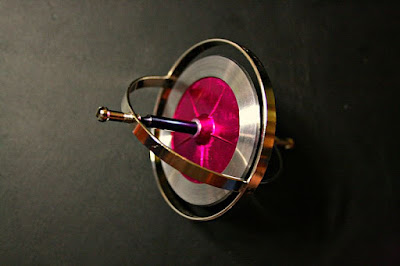 [Image licensed under the Creative Commons Misko from Bilbao but I wish it was Amsterdam or Biarritz, Simple Gyroscope, CC BY 2.0]

So it's a hard instrument to fool.  And the head Flerf, Bob Knodel, who has a YouTube channel devoted solely to proving that the Earth is flat, actually bought a ring laser gyroscope (to the tune of twenty thousand dollars), and the gyroscope showed...

... that the axis of rotation was deflecting by fifteen degrees per hour.  Precisely what you'd expect if the Earth is making one full rotation (360 degrees) in twenty-four hours.

"What we found is, when we turned on that gyroscope, we found that we were picking up a drift," Knodel said.  "A 15-degree per hour drift.  Now, obviously we were taken aback by that - 'Wow, that's kind of a problem.'"

Yeah, you could say that.  But he and his friends were undeterred.

"We obviously were not willing to accept that," Knodel said, "and so we started looking for ways to disprove it was actually registering the motion of the Earth."

Yup, that's the way to approach science.  If the data from an extremely accurate instrument disagrees with your favorite hypothesis, then throw out the data.

Then he added, "What I just told you was confidential."

Which explains how the entire conversation ended up on the internet.

I try to be kind, but I have to admit that when I read this, my response was:

I mean, really.  These people have gone to ridiculous lengths trying to support their ridiculous ideas, so I have to say when they sunk twenty grand into an instrument and it ended up proving them wrong, they deserved everything they got.

It'd be nice to think that this would be the end of the Flerfs, that they'd retreat in disarray and we'd never hear from them again.  Of course, this is almost Flerf-level wishful thinking.  Once woo-woos find out their cherished ideas are wrong, they immediately go into wild gyrations to show how the evidence is actually what's wrong.  For example, every year there are more studies to show that the anti-vaxxers are completely full of horse waste, and yet they are not only undaunted, their numbers are growing, and they dream up all sorts of convoluted reasons (mostly revolving around conspiracies by Big Pharma) to show that the data is wrong.

Same with the Flerfs, which is kind of depressing. especially since their arguments all kind of boil down to "I've looked, and it sure looks flat to me."  But I'd better wrap this up, because the Sun is getting high above the edge of the disk, so time's a wastin'.