Sometimes there's a scientific discovery that's just such an "oh, wow!" that I have to tell you about it.

Like the research that was published in the Astrophysical Journal last week.  "Origin of a Massive Hyper-runaway Subgiant Star LAMOST-HVS1: Implication from Gaia and Follow-up Spectroscopy," by Kohei Hattori, Monica Valluri, Norberto Castro, Ian U. Roederer, Guillaume Mahler, and Gourav Khullar, of the University of Michigan - Ann Arbor, describes a star that was ejected from our galaxy at a speed that boggles the imagination.

This star -- the euphoniously-named LAMOST-HVS1 -- is traveling at about 570 kilometers per second, on a trajectory almost perpendicular to the plane of the Milky Way Galaxy.  (If it helps, that's over a million miles an hour.)  It was initially thought that the star might have been evicted from the center of the galaxy, where there is an enormous black hole -- only something that massive, scientists thought, could impart enough energy to a star to get it traveling that fast.  But tracking its path backward showed that it didn't come from the center, but from a region called the Norma Spiral Arm. 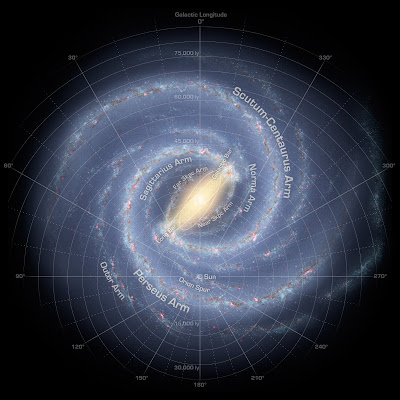 What this seems to indicate is that there are massive black holes scattered throughout the galaxy, not concentrated at the center.  Which is vaguely terrifying.  The scenario is apparently that a binary star was drawn in toward the black hole, and as it fell toward the event horizon, one of the two gained enough energy to be flung free -- what's called the "gravitational slingshot effect."  This phenomenon has been used to get countless television and movie spacefarers out of sticky situations, most notably in the 1998 film Lost in Space, wherein we learn that something being a truly awful television show is not sufficient to stop producers from turning it into an even worse movie.  I say "worse," even though Lost in Space was uncategorically abysmal, because the movie took itself so damn seriously.  When the television show brought out space vikings or space cowboys or space hippies or a space motorcycle gang -- none of which, by the way, I'm making up -- at least they knew they were being campy.

But here, we're actually supposed to believe the intrepid crew of the Jupiter 2, having just escaped from Gary Oldman as a Dr. Smith who has turned into a giant humanoid spider (for the record, I'm not making that up, either), realizes that they don't have enough oomph to escape from the planet that's disintegrating around them, so Matt LeBlanc as Major Don West decides to use the "gravity well" of the planet to fling them free.  So he puts the Jupiter 2 into a power dive, and somehow they go all they way through the planet, miraculously dodging all of the rocks and debris, not to mention an entire mantle and core's worth of molten lava, and get squirted out of the other side like someone spitting out a grapefruit pit.

In any case, the writers of the script actually were referencing a real phenomenon, but one which would be unlikely to save you if you are ever in the situation of having your spaceship run out of gas while trying to escape from an exploding planet.  "This discovery dramatically changes our view on the origin of fast-moving stars," said study co-author Monica Valluri, in a press release.  "The fact that the trajectory of this massive fast-moving star originates in the disk rather that at the Galactic center indicates that the very extreme environments needed to eject fast-moving stars can arise in places other than around supermassive black holes."  (The press release also has a nice gif showing the star's path, which you should all check out.)

All of which is pretty cool, especially since there have only been around thirty of these "hyper-runaway" stars ever observed.  Given its current position, it's interesting to think about what the sky would look like to a denizen of one of its planets (yes, I know, any denizens it may have had surely wouldn't have survived a close encounter with a black hole, but just bear with me here).  I'm reminded of Carl Sagan's comment about a star in that position experiencing not a sunrise but a galaxy-rise -- from where it is, the disc and arms of the Milky Way would fill the entire night sky.

So there's some awe-inspiring research from the astronomers.  I don't see how anyone would not find this astonishing.  Maybe if you were like the Robinson family, meeting hordes of aliens every week, you'd get inured, but I can't help but think I'd still be pretty blown away even so.