The collapse of reality

I can say with some level of confidence that I'm nowhere near smart enough to be a philosopher.  Or, honestly, even to read most philosophical treatises with understanding.

An acquaintance of mine is a Ph.D. in philosophy, and she showed me a bit of her dissertation.  It was a kind gesture, but I read the piece of it she sent me with the same expression my dog gets when I try to explain something to him that's completely beyond his grasp, like why I don't want to play ball when we're in the middle of an ice storm.  You can tell he really wants to understand, that he would if he could, and that he feels bad that it makes no sense to him, but the whole thing only registers enough to trigger the Canine Head-Tilt of Puzzlement.

So with that disclaimer out of the way, I'm going to leap into deep waters surrounding an experiment that was the subject of a paper in arXiv last month that -- according to an article in MIT Technology Review -- shows that there's no such thing as objective reality.

The paper, entitled, "Experimental Rejection of Observer-Independence in the Quantum World," by Massimiliano Proietti, Alexander Pickston, Francesco Graffitti, Peter Barrow, Dmytro Kundys, Cyril Branciard, Martin Ringbauer, and Alessandro Fedrizzi, working at Heriot-Watt University (Edinburgh, Scotland), investigates a little-known conundrum of quantum mechanics called the Wigner's Friend Paradox.  This one adds a new layer onto the famous Schrödinger's Cat Paradox, which seems to imply that something can be in two opposing states at once until someone observes it and "collapses the wave function."

Let's say there's a single photon being studied in a laboratory by a colleague of Wigner.  The friend observes the photon, which can be polarized either horizontally or vertically -- Wigner doesn't know which.  The friend does a measurement to find out the direction of polarization of the photon, collapsing its wave function and forcing it into one or the other, and then writes down the results -- but doesn't tell Wigner.

Then Wigner studies the same photon.  What he'll find, goes the theory, is that to Wigner, the photon is still in two superposed states at the same time.  Ergo, Wigner and his friend observe the same real phenomenon, and they come up with different answers about it.

And they're both right.

This seems like some kind of trickery, but it's not.  Reality for Wigner and his friend are demonstrably different.  This opens up a particularly snarly (and bizarre) problem called the "consciousness causes collapse" interpretation of quantum mechanics, and that's where the waters get even deeper. 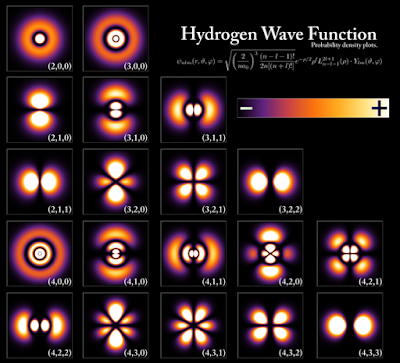 In a nutshell, here's the problem.  The collapse of the wave function happens because of interaction with an observer, but what counts as an observer?  Does the observer have to be conscious?  If a photon strikes a rock, with a particular result in terms of interacting with the rock's atoms, is the rock acting an observer?  To physicist Pascual Jordan, this seems to be stretching a point.  "[O]bservations not only disturb what has to be measured, they produce it," Jordan said.  "We compel [a quantum particle] to assume a definite position...  [therefore] we ourselves produce the results of measurements."

Which prompted Einstein himself to respond that the Moon did not cease to exist when we stopped looking at it.

Despite Einstein's scoffing, though, it seems like that's exactly the sort of thing Wigner's Friend suggests.  The Proietti et al. paper is unequivocal that the "observer problem" can't be dismissed by saying that everything, even inanimate matter, could be an observer, because it requires a sentient entity recording the results of the experiment to produce the effect.  The authors write:


The scientific method relies on facts, established through repeated measurements and agreed upon universally, independently of who observed them.  In quantum mechanics, the objectivity of observations is not so clear, most dramatically exposed in Eugene Wigner's eponymous thought experiment where two observers can experience fundamentally different realities.  While observer-independence has long remained inaccessible to empirical investigation, recent no-go-theorems construct an extended Wigner's friend scenario with four entangled observers that allows us to put it to the test.  In a state-of-the-art 6-photon experiment, we here realise this extended Wigner's friend scenario, experimentally violating the associated Bell-type inequality by 5 standard deviations.  This result lends considerable strength to interpretations of quantum theory already set in an observer-dependent framework and demands for revision of those which are not.

The MIT Technology Review article outlines how earthshattering this result is.  The author writes:


[T]here are other assumptions too.  One is that observers have the freedom to make whatever observations they want.  And another is that the choices one observer makes do not influence the choices other observers make—an assumption that physicists call locality.

If there is an objective reality that everyone can agree on, then these assumptions all hold.

This is the point where my brain simply rebelled.  I've always considered myself a staunch materialist, although (as I said before) I'm well aware both of the fact that there are philosophical arguments to the contrary and that most of them are way beyond my mind to comprehend.  But I've been able to effectively ignore those arguments because science -- my touchstone for reality -- has always seemed to me to support a materialist view.  This table, this desk, this coffee cup all have a realness independent of me, and they would be there substantially unchanged if I weren't looking, or even if I ceased to exist.

But the truth is, as usual, more complex than that.  The hard-edged materialism I've always found so self-evident might not just be arguable, but simply wrong from a scientific basis.  Perhaps our consciousness creates reality -- a view espoused by mystics, and typically rejected by your stubborn science-types (like myself).

I don't know if I'm quite ready to jump there yet.  As the MIT Technology Review article said, it may be there are loopholes in the Wigner's Friend experiment that haven't been uncovered yet.  But one by one those options are being eliminated, with the result that we materialists might be forced to reconsider, if not completely overturn, our view of the world.

All of which makes me feel like I want to hide under my blanket until it all goes away.  Or maybe just play ball with my dog, ice storm be damned.