One of the hardest biases to overcome is dart-thrower's bias, which is the tendency to notice outliers and ignore all of the background noise.  The reason it's hard is because our brains are pattern-seeking devices; we evolved to notice what's odd, because the odd is often dangerous (or at least worth paying attention to).  But it leads to an inevitable tendency to overestimate the weird stuff -- strange coincidences, cases where dreams seem to be precognitive, times you and a friend said the same thing at the same time -- and underestimate all of the millions of times when those things didn't happen.

But in science, we have to keep track of both the hits and the misses.  As an example of what happens if you don't, let's look at the case of the cursed football player.

Aaron James Ramsey is a Welsh footballer (or soccer player, as we'd call him here in the States) who plays for Arsenal and also for the Welsh national team.  And a strange superstition has grown up around him -- that whenever he scores a goal, a famous person somewhere in the world dies. 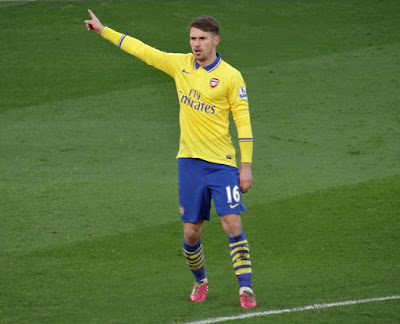 On and on it goes.  The "Ramsey curse" has been blamed for the deaths of basketball player Ray Williams, actors Paul Walker, Robin Williams, and Alan Rickman, and rock legend David Bowie.  The demise of Nancy Reagan, screenwriter Bruce Forsythe, comedian Ken Dodd, physicist Stephen Hawking, and champion darts player Eric Bristow were all blamed on the Ramsey curse phenomenon.

Okay, so here's the problem.

According to his online statistics, Ramsey has had 32 goals in his professional career, but the article about the "curse" (linked above) says that only sixteen of them were followed by deaths of prominent individuals.  So this is already giving the "curse" a 50% success rate.

But there are two other problems.  First is how we're defining the word "famous."  I don't know about you, but of the fourteen "famous people" I listed above that Ramsey has allegedly killed, I'd never heard of four of them -- Ray Williams, Forsythe, Dodd, and Bristow.  No offense to darts enthusiasts, but even a champion darts player isn't quite in the same league as David Bowie.  So if you're defining "famous" that loosely, you've got a big field to choose from.

Second, though -- can you find a date that didn't have a famous death somewhere immediately following it?  There are so many people in the news, in sports, and in entertainment that there are bound to be deaths pretty much every week (especially if you have that broad a definition of fame).  So in order to establish whether there really was a "Ramsey curse," we'd have to keep track of all of his goals and all deaths of famous people, and show that deaths were statistically more likely to happen closer to his scoring a goal.

As far as Ramsey goes, he (understandably) scoffs at the whole idea.  "The most ridiculous rumour I’ve heard is that people die after I score.  There have been loads of occasions where I’ve scored and nobody has died.  That’s just a crazy rumour.  I didn’t really find it funny.  Although I took out some baddies!"

So anyhow, Arsenal fans don't need to panic every time Ramsey scores a goal.  These kinds of coincidences are bound to happen -- and once someone notices them, they stand out, making them more likely to be noticed next time.

But if I'm wrong, I do wish he'd spared Stephen Hawking and Alan Rickman.  Still haven't gotten over those, actually.