We're taking a day off from our regularly scheduled programming because of a story that upset me so much I have to write about it.

I wrestled with whether I should address this here for over 24 hours, wondering what contributing my two-cents'-worth would accomplish, and then I decided I had to speak up.  My mind keeps coming back to the story, and that's a sign that I still need to process my thoughts and (especially) my emotions on the topic.

The story hit the news a couple of days ago.  Apparently, in Monticello, Indiana, part of the Twin Lakes School District, the powers-that-be staged an "active shooter drill."  We do this in my own school (although we call it a "lockdown drill") -- the principal calls a lockdown, we shut and lock our doors, turn the lights off, and everyone gets into a part of the classroom that can't be seen from the window in the door.  The idea is to get used to responding to any potential threats by making it look like the room is unoccupied.

The administrators in Monticello decided to push it one step further.  They had people posing as actual shooters, armed with Airsoft pellet guns, and they forced their way into one of the rooms, lined the teachers up four at a time, made them kneel, and shot them in the back, execution-style.  People out in the hall heard screams, and the Airsoft pellets raised welts and at least in one case, drew blood.

Neither the school district nor the law enforcement officials who conducted the drill were willing to comment on what happened. 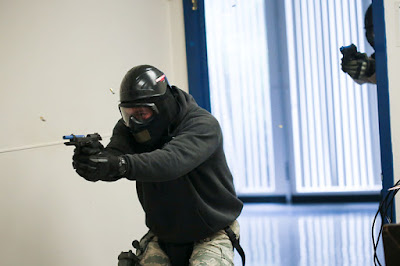 The Indiana State Teachers' Association was understandably outraged.  "The teachers were terrified, but were told not to tell anyone what happened.  Teachers waiting outside that heard the screaming were brought into the room four at a time and the shooting process was repeated," the Association said on Twitter.  "No one in education takes these drills lightly.  The risk of harming someone far outweighs whatever added realism one is trying to convey here."

Representative Wendy McNamara, who co-authored a bill requiring schools to hold shooter drills, expressed amazement that it was handled this way.  "I would never have thought in a million years that anybody would have thought that it made sense to use in an active shooter drill where teachers are unaware that they're going to be shot with a pellet gun," she said.  "That would have never crossed my mind as something we'd need to legislate."

Me neither, Representative McNamara.

It also brings up the question of who in the hell thought this was a good idea.  The principal?  The superintendent?  Was the district pushed by the sheriff's office to include this as part of the drill?  Of course, since all they'll say is "no comment," no one at this point knows for sure except the people who made the decision.

Being a teacher, of course what this brought up in my mind is how I'd respond if this happened in my school.  My first reaction is that when the guy with the pellet gun told me to kneel on the floor, I'd have told him, "Not just no, but fuck no."  But the people acting as the shooters were police officers who were armed with more than Airsoft guns.  What would have happened if I'd refused?  Is this (in a legal sense) refusing to cooperate with law enforcement?  What if I walked out?  What if I disobeyed what I was told, and yelled to the other teachers waiting to be executed that they needed to get the hell out of there?

I'd like to think if I refused to cooperate, and the policeman had said, "Do it or you're under arrest," I'd have said, "Go ahead, you asshole.  Arrest me.  I'll see you and the school district representatives in court."  But you never know how you'll react when you're in a highly emotional situation, and especially one you were not expecting.  Because -- if this wasn't clear enough -- none of the teachers were warned ahead of time that this would happen.

I do know that afterward, the first thing I'd do is to turn in my letter of resignation.  Along with a lengthy explanation of why.  If I can't trust the people in charge of my school to do whatever has the best interest of the students' and staff's emotional health in mind, I'll find other employment.

The second thing I would do is mail a copy of the letter to every news outlet I can think of.

But this doesn't alter the fundamental problems with this situation, which include:
I don't seem to be getting over the outrage I felt the first time I saw this story, two days ago.  The more I think about it, the madder I get.  I'm not a big fan of lawsuits, but I hope that the Indiana State Teachers' Association sues the absolute shit out of either Twin Lakes School District, the White County Sheriff's Department, or both, on behalf of the teachers who are probably still recovering from the emotional trauma of what they went through.

Beyond that, I can't think of anything more to say.  But maybe if enough people find out about this, it'll make it less likely that some trigger-happy administrator or policeman decides it'd be good to stage a mock shooting in the name of "realism."