The Gaia Hypothesis and the danger of models

This has a good result and a bad result.  The good result is that the use of model, analogy, and metaphor makes science accessible for non-scientists.  You don't have to understand piles of abstruse mathematics in order to get a glimpse at the weirdness of quantum theory; if you read last week's post on the Wigner's Friend Paradox, you've seen an example.  In my own teaching, I use analogy all the time.  Antibodies are like trash tags.  Transpiration in plants is like a very long chain attached to the underside of a trampoline.  The Krebs Cycle is like a merry-go-round in which two kids get on and two kids get off at every turn.

The downside, however, is twofold.  The first problem is that it's easy at times to think that the model is the reality.  The goofier the metaphor, the easier it is to avoid this pitfall; I've never had a student yet who thought that the Krebs Cycle really was a merry-go-round (although I did have a student of mine start her essay on antibodies on the AP exam, "So, antibodies are trash tags...").  But with sophisticated, complex models, it's tempting to think that the model is, down to the level of details, what is happening in the real world.

The second downside is that some people will grab the model and run right off the cliff with it.

All of this comes up because a friend of mine asked me what I thought about the Gaia Hypothesis.  I know that this friend to be a sharp, smart, and solid thinker, so I didn't wince, which is what I usually do when someone brings this subject up.  Because I can't think of an idea in science that has fallen so prey to the model vs. reality blur as this one has. 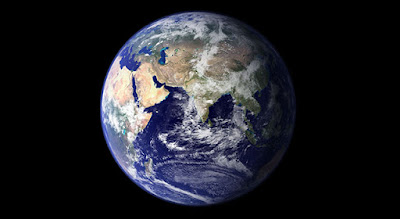 Gaia was dreamed up by two scientists of high repute -- James Lovelock and Lynn Margulis -- way back in the 1970s.  The central idea of Gaia is that the Earth's biosphere acts as an interlocking set of self-regulatory systems, and they work together to maintain the homeostasis of the whole in much the same way as organ systems do in an organism.  Lovelock and Margulis identified a number of features of the biosphere, including the carbon dioxide levels, nitrogen levels, oxygen levels, oceanic salinity, and average temperature, that all seem to work through a complex pattern of negative feedback to keep the Earth's systems within a range that is comfortable for living things.  Using computer simulations, Lovelock and Margulis showed that even with a simple model, they could create a "world" that remained stable, and for which the living things played a role in regulation.

All of this is well and good, and Lovelock and Margulis were completely clear about what their model did (and didn't) mean.  (If you're curious, here's the Gaia homepage, run by Lovelock and other scientists working in this field; Lynn Margulis, tragically, died in November of 2011.)

The problem is, lots of people think that the scientists who developed the Gaia Hypothesis meant way more than they actually did.  Part of it was Lovelock's rather inadvisable choice of a Greek goddess's name for christening his model, which brings up lots of images of personified deities, Mother Earth, and New Age nature spirits.  This particular twist really irritates fundamentalist Christians; take a look at the misleadingly named site Environment and Ecology, wherein we find that the Gaia model encourages "radical environmentalism and ecofeminism," because it runs counter to the biblical passage about god giving man "dominion" over the Earth.

Even ignoring the objections of the wacko biblical literalists, I suppose it's natural enough that people could misinterpret Gaia.  The whole thing is just so... suggestive.  And misinterpret it they did, first thinking that because Lovelock and Margulis said that the Earth was like an organism, that they were saying that it was one; and then grabbing the analogy and leaping into the void with it.  As an example of where this can lead, take a look at Truth and Reality: The Metaphysics of Gaia, wherein we find passages like the following:


The GaiaMind Project is dedicated to exploring the idea that we, humanity, are the Earth becoming aware of itself.  From this perspective, the next step in the evolution of consciousness would seem to be our collective recognition that through our technological and spiritual interconnectedness we represent the Earth growing an organ of self-reflexive consciousness.  While we believe that the Earth is alive, and we are part of it, we also affirm the Great Spirit of Oneness found at the heart of all the worlds great spiritual traditions.  What is most important may not be what we believe, but what we find we all share when we put our thoughts aside to go into meditation and prayer together.


Ergo: The Earth is becoming conscious. It'd really be nice of you to pray about it, because that'd help the process right along.

It's all a matter of keeping your head screwed on when you read this stuff; where does the science end and the woo-woo start?  It's always best to go back to see what the scientists themselves said on the topic.  While being a scientist isn't always a guarantee against fuzzy thinking, I'd put more reliance on the ability of your typical scientist to tell fact from fiction than that of someone whose main contribution to the discussion is rambling on in some random blog on the topic.  (Irony intended.)

Still, the use of models is, on the whole, a good thing.  It gives us something to picture, a way to frame our understanding of what is going on in the real world.  You just have to know how far to push the model, and when to quit. It is, in other words, a starting point.  And if along the way it can piss off some creationists, it's all good.