I had a puzzling, and frustrating, exchange on social media a couple of days ago.

An acquaintance of mine posted the following, without comment: 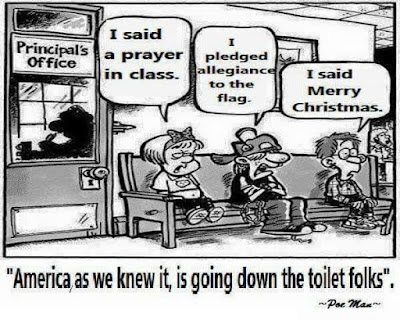 I found this annoying enough that I responded something to the effect that I teach in a public school, where I have (1) seen students saying grace before eating lunch and no one has batted an eyelash, (2) we recite the Pledge of Allegiance every single day, as do all public school students in the entire United States, and (3) before December break, I hear both students and staff wishing each other "Merry Christmas."

Now me, if I made a statement and a person who should know demonstrated conclusively I was wrong, I would admit it and retreat in disarray.  Predictably, that's not what happened here.  She responded -- and this is a direct quote -- "I was not saying this was necessarily true, it just feels that like the majority of our schools have gotten so far away from God and Country that one can feel persecuted for the above things."

So let me get this straight.  It's not true, but you feel like it's true, and you're feeling persecuted for being a patriotic Christian despite the fact that  75% of Americans identify as Christian and it's still damn near a prerequisite for winning an election in the United States.

What this implies is that your feelings about something are more important than whether it's actually true.  Which I find more than a little troubling.  Even more troubling is the way the media have capitalized on this tendency, avoiding facts wherever possible in favor of whipping people into a frenzy with emotional appeals.  Lately, it seems like the main church people belong to in the United States is the Church of Our Lady of Perpetual Outrage.

The part of this I find the most baffling is how people seem to want to feel outraged.  I mean, think about it.  Suppose I was fearful that there was a rabies outbreak in my neighborhood.  Maybe there was even the allegation that someone had deliberately introduced rabies into wild animals nearby.  Then, it turns out that it's not true -- there are no cases of rabies, and the rumors of a deliberately-created epidemic are false, and everything is safe.  The whole thing was a hoax.

I don't know about you, but I wouldn't feel more fearful, I'd feel relieved.  I'd probably be angry at the person who started the hoax, but what it wouldn't do is make me double down on how dangerous everything was and how everyone needed to be scared of the horrifying rabies epidemic.

Here, though, my assurance that what this person feared -- that public schools were actively suppressing patriotism and Christianity -- was false had exactly the opposite effect.  "Okay, it's not true," she seemed to be saying, "but we still need to act like it is!"  And the people who are perpetuating the falsehoods aren't looked upon as liars or hoaxers, they're seen as heroic mavericks who are rallying the troops for a desperate last stand defending all that's sacred.

Which I don't understand at all.  I, personally, don't like liars, and I hate feeling outraged.  I much prefer it when my fellow humans turn out to be more kind and caring and tolerant and understanding than I thought they were.  It's hard for me to understand someone who apparently feels the opposite.

All of which highlights the fact that I don't really understand people at all.  Especially, I don't get the appeal of tribalism, but it's clearly a powerful force -- and relies as much on teaming up against a common enemy (even a perceived one) than it does on finding commonalities within the group.  So all in all, my online exchange was a fruitless exercise, as these things so often are -- but it does explain a lot about the current state of things in the United States.