I've always had a fascination for body art.  I got my first tattoo about 15 years ago, a pair of Celtic dogs on my back.  In Celtic mythology, dogs are shapeshifters and protector spirits, and I thought that was cool.  Plus, from a more prosaic angle, I have two dogs. 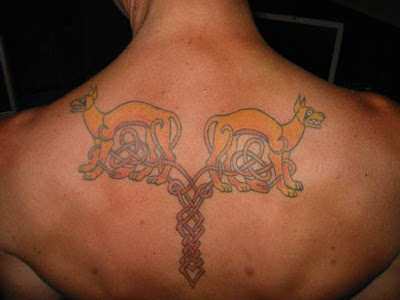 Next was a dragon on my calf, also in a Celtic-knotwork style, in honor of my Scottish grandma, with whom I was really close.  She died in 1986 and I still miss her.  (Nota bene: my leg is usually not this hairless.  This was right after it was done, and -- for those of my readers who haven't gotten any ink -- you get a close shave before the artist starts.) 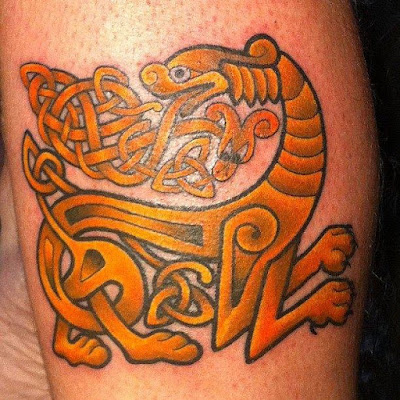 My latest one, in honor of what would have been my dad's hundredth birthday, is a snake on my arm.  My dad loved snakes, and instilled in me an appreciation for creepy-crawlies (or, in this cases, slinky-slitheries) that I still have. 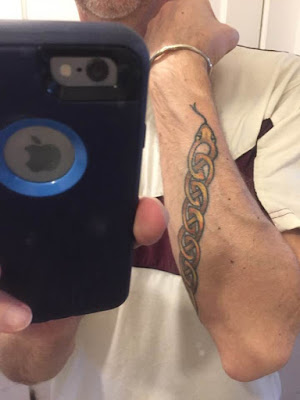 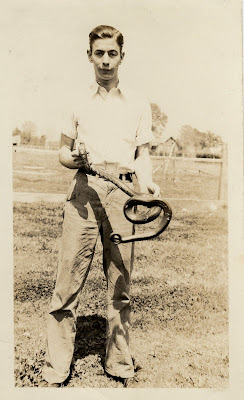 The reason all this comes up is because of a discovery made by a Ph.D. candidate in anthropology at Washington State University, which resulted in a paper published last week in the Journal of Archaeological Science.  Andrew Gillreath-Brown was going through some artifacts at the university that had been boxed and shelved for over forty years, and happened upon this: 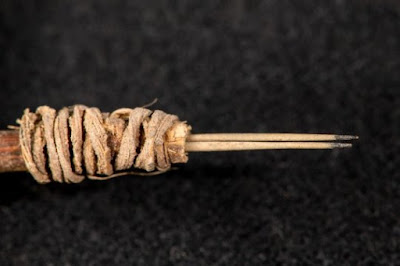 Well, Gillreath-Brown not only is an archaeologist, he also is into body art himself, with a full sleeve featuring a mastodon, a turtle-shell rattle, and a forest scene.  So he immediately recognized what it was.

It's a two-thousand-year-old tattoo instrument, made of a pair of cactus spines bound together by plant fibers, with a handle made of skunkbush wood.

This pushes back the earliest confirmed date of tattooing in western North American Native tribes by over a thousand years.  "Tattooing by prehistoric people in the Southwest is not talked about much because there has not ever been any direct evidence to substantiate it," Gillreath-Brown said, in an interview in Science Daily.  "This tattoo tool provides us information about past Southwestern culture we did not know before... [the tool] has a great significance for understanding how people managed relationships and how status may have been marked on people in the past during a time when population densities were increasing in the Southwest."

So that's just plain cool.  Gillreath-Brown's paper, co-authored with Aaron Deter-Wolf, Karen R. Adams, Valerie Lynch-Holm, Samantha Fulgham, Shannon Tushingham, William D. Lipe, and R. G. Matson, is titled "Redefining the Age of Tattooing in Western North America: A 2000 Year Old Artifact from Utah," and makes for interesting reading even if you (1) aren't an archaeologist, and (2) don't have any body art yourself.  The authors write:


How people decorate their bodies provides insight into cultural expressions of achievement, group allegiances, identity, and status.  Tattooing has been hard to study in ancient societies for which we do not have tattooed mummies, which adds to the challenge of placing current body modification practices into a long-term global perspective.  The tattooing artifact dates to 79–130 CE during the Basketmaker II period (ca. 500 BCE – 500 CE), predating European arrival to North America by over 1400 years.  This unusual tool is the oldest Indigenous North American tattooing artifact in western North America and has implications for understanding archaeologically ephemeral body modification practices...  Events such as the Neolithic Demographic Transition—which occurs in many places around the globe—may link to an increase in body modification practices as social markers, as appears to be the case for the Basketmaker II people in the southwestern United States.

Whatever you think of tattoos, the practice has obviously been around for a very long time.  At its best, it's a form of self-expression and honoring important people and events, connecting with spiritual practices, and simply creating and wearing beautiful designs.  It connects us to our far-distant ancestors in ways we are only now beginning to understand.

All of which makes me glad I have the ink I have.