A map from the home world

One of the most persistent -- dare I say, canonical -- stories of alien abduction is the tale of Betty and Barney Hill.

The gist of the story is that the Hills, a couple from Portsmouth, New Hampshire, were driving home from their vacation in September of 1961, and near Franconia Notch, New Hampshire they saw a UFO that seemed to be following them.  After observing it for a while, including through binoculars, they experienced a time-slip -- they found themselves back home without any memory of how they'd gotten there.  The following day, they noticed some oddities -- Barney's new dress shoes were scuffed, the leather strap on his binoculars was broken, neither of their watches worked, and there were several shiny concentric marks on the hood of their car.

They were puzzled, but no explanation seemed forthcoming, so they forgot about it -- until Betty started to have dreams about being aboard a spacecraft.  This eventually led to some hypnosis sessions in which both of them claimed to have suppressed memories of being abducted and examined (our lore about aliens doing, shall we say, rather intimate examination of abducted humans comes largely from Barney's claims under hypnosis).

All of this would be nothing more than your usual Close Encounter story -- lots of wild claims, nothing in the way of hard evidence -- if it weren't for one thing that Betty revealed.  While she was on the spaceship, she said, she was shown a star map that had the aliens' home world and various other star systems with lines between them showing "trade routes."  She attempted to reconstruct a two-dimensional drawing (she said the map she'd been shown was three-dimensional), and here's what she drew: 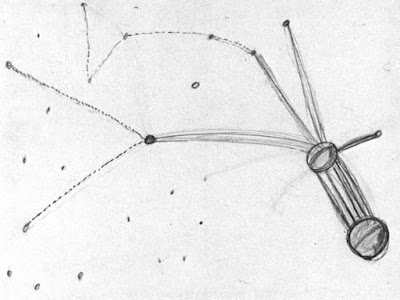 Now, potentially, this could be interesting.  One of the more eye-opening things I learned when I was a teenager watching the original Cosmos series was that the constellations in our night sky only seem 2-D from our perspective, but there's actually a third dimension -- depth -- that we can't see from Earth.  If you add that third dimension, it becomes obvious that what we call "constellations" are actually random assemblages of stars that only seem near each other from our perspective, but are actually at greatly varying distances from us.  This means that if they were observed from a different vantage point the constellations would look nothing like they do here at home, and in fact, many of the stars that appear to be close together would be widely separated in the sky.  (One of the coolest animations from the series was looking at the stars of the Big Dipper, first from the Earth, then making a huge circle around it -- it doesn't take much of a difference in angle to make it look nothing at all like the Big Dipper.)

So if Betty Hill's recollection of the alien star map was real, then it'd be pretty convincing -- because the aliens presumably would have drawn the stars from the perspective of their home star system, not ours.  This would be mighty hard to fake now, much less 58 years ago.  So the race was on to try and figure out whether the map Betty Hill drew conformed to any known configuration of stars as viewed from somewhere else in the galaxy.

The person whose answer is the most commonly accepted by UFO enthusiasts is Marjorie Fish, who identified the home world of the aliens as Zeta Reticuli (thus kicking off all of the claims that the Annunaki, the "Greys," and various other superintelligent species have come here from that star system).  Starting from that star, Fish said, there are nearby stars that could represent the ones on the Hill map.

Which brings up the problems with the claim.

Recall that the map is the only hard evidence -- if you can call it that -- to come out of the Hill story.  Brian Dunning, of the brilliant blog Skeptoid, is critical of the claim right from the get-go:


Several years [after the alleged abduction], a schoolteacher named Marjorie Fish read a book about the Hills.  She then took beads and strings and converted her living room into a three dimensional version of the galaxy based on the 1969 Gliese Star Catalog.  She then spent several years viewing her galaxy from different angles, trying to find a match for Betty's map, and eventually concluded that Zeta Reticuli was the alien homeworld.  Other UFOlogists have proposed innumerable different interpretations.  Carl Sagan and other astronomers have said that it is not even a good match for Zeta Reticuli, and that Betty's drawing is far too random and imprecise to make any kind of useful interpretation.  With its third dimension removed, Betty's map cannot contain any useful positional information.  Even if she had somehow drawn a perfect 3D map that did exactly align with known star positions, it still wouldn't be evidence of anything other than that such reference material is widely available, in sources like the Gliese Star Catalog.

The problem runs deeper than that, though.  Long-time readers of Skeptophilia may recall a piece I did a while back on ley lines -- the idea that there are towns and sacred sites that are aligned because there are "energy currents" beneath the ground that flow in straight lines, and were the why the ancients chose to build on those specific sites.  The trouble is (as my post describes), in any arrangement of random dots, you can find strings of dots that are close to falling in a straight line, just by random chance.  No "energy currents" required.

Here, the difficulty is magnified by the fact that we don't just have a couple of hundred dots (or, in this case, stars), but tens of thousands, and that's just counting the relatively nearby ones.  Also, they're not on a flat surface, as with the ley lines; they're in a three-dimensional grid, which you're allowed to look at from any perspective you want to.

If those are were Marjorie Fish's constraints, it's actually astonishing that she took years to find a group of stars that matched Betty Hill's map.

We're pattern-finding animals, we humans.  As with pareidolia -- our capacity for seeing faces in inanimate objects like clouds, walls, and grilled-cheese sandwiches -- if there's no pattern there, our brains will often invent one.  Add to that confirmation bias and just plain wishful thinking, and it's not hard to see that the Hill map -- still considered the best evidence for the Hills' story -- is actually not much in the way of evidence at all.

Allow me to emphasize that I'm not saying Betty and Barney Hill weren't abducted.  It's just that -- to end with quote Neil DeGrasse Tyson -- "As a scientist, I need more than 'you saw it...'  If you have an actual object taken from a spacecraft, though, you'll have something of alien manufacture, and anything that has crossed interstellar space to get to Earth is going to be interesting.  So show me an object you've taken from the spaceship, and then we can talk."