An avalanche of fire

One of the most utterly terrifying phenomena on Earth is called a pyroclastic flow.

Pyroclastic flows are explosive eruptions of volcanoes that release not molten rock, but finely pulverized debris and hot gases that then flow downhill at an astonishing rate -- in some cases, forming a cloud at a temperature of 1000 C moving at an almost unimaginable 700 kilometers per hour.  Pompeii and Herculaneum were destroyed by pyroclastic flows from Mount Vesuvius on August 24, 79 C.E., which killed everyone in their path and buried the cities under layers of ash, where they remained for centuries until being unearthed by archaeologists.

If you're not too prone to freak-out over such things, I strongly recommend this ten-minute animation that recreates the destruction of Pompeii:


More recently, a 1902 eruption of Mount Pelée on the island of Martinique triggered a pyroclastic flow that obliterated the city of Saint Pierre, killing 30,000 people in an estimated five minutes.  There were only three survivors -- Louis-Auguste Cyparis, who was lucky enough to be in an underground dungeon; Léon Compère-Léandre, who lived on the edge of town and still suffered severe burns; and Havivra Da Ifrile, who was on the beach when the eruption started and had the presence of mind to jump in a rowboat, where she was later found, unconscious and adrift, three kilometers offshore.

Saint Pierre before the eruption... 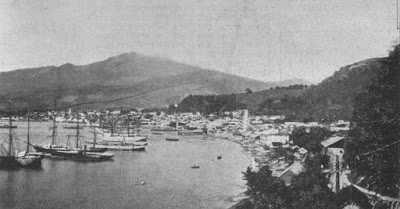 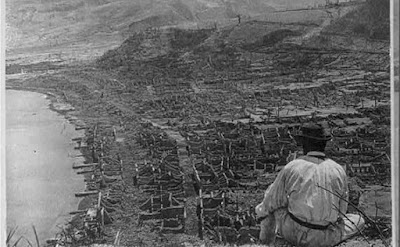 [Images are in the Public Domain]

What has long been a mystery to volcanologists is how pyroclastic flows achieve the speeds they do, which, after all, is the key to their deadliness.  Lava flows, while they can do tremendous damage to houses and land, rarely cause loss of life because they can almost always be outrun (or in some cases, outwalked).  The fastest pyroclastic flows, on the other hand, are moving so rapidly that even if you had warning, you couldn't move quickly enough to escape.

But a paper last week in Nature describes how a team from three universities in New Zealand (Massey University, the University of Auckland, and the University of Otago) and one in the United States (the University of Oregon) created a model of pyroclastic flows, and found that the reason they travel so quickly is basically the principle of air hockey -- the cloud is suspended on a cushion of superheated air, reducing the friction to nearly zero.

In "Generation of Air Lubrication Within Pyroclastic Density Currents," by Gert Lube, Eric C. P. Breard, Jim Jones, Luke Fullard, Josef Dufek, Shane J. Cronin, and Ting Wang, we find out about a series of experiments that are not only cool but must have been extremely fun to carry out.  They built a twelve-meter-long chute, mined some volcanic particles (deposited in the 232 C.E. eruption of New Zealand's Mount Taupo), heated it up to 130 C, and sent 1000 kilograms of it at a time barreling down the chute, all the while filming it with an ultrafast camera.

As Michelle Starr, writing for Science Alert, describes the results:


[W]ithin the flow there were extremely high shear rates - the rate at which layers in a fluid flow past each other.  When shear increases, so does air pressure; and when shear rates are at their highest, that pressure produces a cushion of air just above the ground, pushing particles away from each other, with denser volcanic dust layers sliding over the top of it.

The result is that the flow keeps moving downhill at higher and higher rates until it hits an obstacle, dissipates, or cools enough that the effect diminishes and the particles slow down.

This makes me glad I live in such a benign part of the world.  Here in upstate New York, the worst we have to worry about is the occasional snowstorm, and the fact that the summers are distressingly short.  (This year, summer is scheduled for the second Thursday in July.)  But compared to living near an active volcano, or a hurricane zone, or Tornado Alley, or near a seismic fault line -- I'd say we're pretty damn fortunate.

But of all the natural disasters the Earth is capable of creating, I don't think there's anything quite as terrifying as these avalanches of fire -- unpredictable, lightning-fast, and capable of destroying everything in their path.  Compared to that, I'd choose our long, cold winters in half a heartbeat.