I have great respect for scientists, which I hope is obvious from the content of this blog.  Even so, there are times I read scientific research and say, "What the hell were they thinking?"

That was my first thought when I read a BBC News article claiming that playing dubstep music by Skrillex makes mosquitoes less likely to bite and mate.  If you don't know who Skrillex is, that's probably a good thing if you've got reasonably refined musical sensibilities.  I try to be tolerant of other people's musical tastes and acknowledge that what you like is a matter of opinion, but it is my considered judgment that Skrillex sounds like a robot having sex with a dial-up modem.

So apparently what they apparently did is to play Skrillex for some mosquitoes, and the mosquitoes apparently didn't feel like eating or mating, which I have to admit is kind of the effect it has on me.  "[T]he occurrence of blood feeding activity was lower when music was being played," the scientists write.  "Adults exposed to music copulated far less often than their counterparts kept in an environment where there was no music...  The observation that such music can delay host attack, reduce blood feeding, and disrupt mating provides new avenues for the development of music-based personal protective and control measures against Aedes-borne diseases." 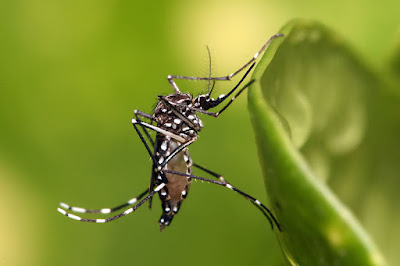 When I finished reading the article, my first thought was that this was a typical sensationalized report on scientific research, where popular media completely misrepresents what the scientists did in order to get clicks.  Sadly, this is not the case.  The BBC News actually did a pretty good job of describing the research -- it's just that the research was kind of... um... terrible.

Here's a piece from the paper itself, which appeared in Acta Tropica last week and is entitled,
"The Electronic Song 'Scary Monsters and Nice Sprites' Reduces Host Attack and Mating Success in the Dengue Vector Aedes aegypti," by a team of researchers led by Hamady Dieng of the University of Malaysia:


Sound and its reception are crucial for reproduction, survival, and population maintenance of many animals.  In insects, low-frequency vibrations facilitate sexual interactions, whereas noise disrupts the perception of signals from conspecifics and hosts.   Despite evidence that mosquitoes respond to sound frequencies beyond fundamental ranges, including songs, and that males and females need to struggle to harmonize their flight tones, the behavioral impacts of music as control targets remain unexplored. In this study, we examined the effects of electronic music ("Scary Monsters and Nice Sprites" by Skrillex) on foraging, host attack, and sexual activities of the dengue vector Aedes aegypti.   Adults were presented with two sound environments (music-off or music-on).  Discrepancies in visitation, blood feeding, and copulation patterns were compared between environments with and without music.  Ae. aegypti females maintained in the music-off environment initiated host visits earlier than those in the music-on environment.  They visited the host significantly less often in the music-on than the music-off condition.

Which is pretty much what the BBC News article said.

What's wrong with this research is that it falls into what I would call "so what?" studies.  It's the kind of thing that even if the protocols and controls were appropriate, doesn't tell you very much.  Okay, Skrillex screws up mosquitoes.  Why?  They only did "music on" and "music off;" they didn't try different kinds of music, various pure tones, harmonics, combinations of sounds, and other sorts of sounds.  So the outcome really gives us very little information about what's actually going on, and why -- nor how this could be used to reduce the spread of mosquito-borne diseases.

Because frankly, if I had a choice of getting dengue fever and listening to Skrillex all day, I'd have to think about it.

So anyhow, I guess having a paper in a scientific journal doesn't necessarily guarantee that the research it describes isn't kind of silly.  And it also highlights the importance of going from the account in the popular media to the research itself before making a judgment.  Most of the time, if there's a problem or a misrepresentation, it's the popular media that's at fault.

But not always.  So if you want to repel mosquitoes, you might want to do your own experiments.  There must be a better way than subjecting yourself and everyone around you to dubstep.