Going against the flow

Two of the most extensively-tested laws of physics are the First and Second Laws of Thermodynamics -- and in the nearly two centuries since they were first formulated, there has not been a single exception found.

The First Law is the less shocking one.  It's sometimes called the Law of Conservation of Matter and Energy, and says simply that in a closed system, the total amount of matter and energy does not change.  You can turn one into the other, or change its form, but the total quantity doesn't vary.  Unsurprising, and in fact can seem a little circular given that this is how a closed system is defined in the first place.

The Second Law is where things get interesting.  It can be formulated a variety of ways, but the simplest is that in a closed system, the amount of entropy (disorder) always increases.  If entropy is being decreased somewhere (the system is becoming more orderly) it always requires (1) an input of energy, and (2) that somewhere else entropy is increasing, and that increase is larger than the localized decrease.  An example is the human body.  When you go from a single fertilized egg cell to an adult, your overall entropy decreases significantly.  But in the process, you are taking the food molecules you eat and (1) extracting their energy, and (2) increasing their entropy monumentally by chopping them up into little pieces and strewing the pieces about.  So you're able to locally decrease your own entropy, but you leave behind a trail of chaos wherever you go.

Or, as my thermodynamics professor in college put it, a lot of years ago: the First Law says you can't win; the Second Law says you can't break even.  Explaining why the United States Patent Office's official policy is that any application that claims to have a working model of a perpetual motion machine goes directly into the trash without being read any further. 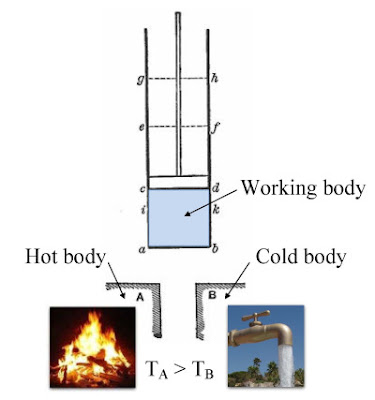 The Carnot Heat Engine [Image is in the Public Domain]

All of this is by way of background for a paper that appeared last week in Science, called, "Heat Flowing From Cold to Hot Without External Intervention by Using a 'Thermal Inductor," by Andreas Schilling, Xiaofu Zhang, and Olaf Bossen of the University of Zurich.  Because in this paper, the three physicists have demonstrated the passage of heat energy from a colder object to a warmer one, without any external energy input -- something first shown as impossible by French physicist Sadi Carnot in 1824.


The cooling of boiling water all the way down to freezing, by thermally connecting it to a thermal bath held at ambient temperature without external intervention, would be quite unexpected.  We describe the equivalent of a “thermal inductor,” composed of a Peltier element and an electric inductance, which can drive the temperature difference between two bodies to change sign by imposing inertia on the heat flowing between them, and enable continuing heat transfer from the chilling body to its warmer counterpart without the need of an external driving force.

When I read this, I sat up, squinted at my computer screen, and uttered an expression of surprise that I will leave to your imagination.  In my AP Biology class, I always described the Laws of Thermodynamics as two of the most unshakeable laws of science -- two rules that are never, ever broken.  The idea that three scientists in Switzerland had taken a simple Peltier element -- a type of heat pump often found in refrigerators -- and made it run without expending any energy was earthshattering.

But before you dust off your plans for a perpetual motion machine, read the next lines in the paper:


We demonstrate its operation in an experiment and show that the process can pass through a series of quasi-equilibrium states while fully complying with the second law of thermodynamics.  This thermal inductor extends the analogy between electrical and thermal circuits and could serve, with further progress in thermoelectric materials, to cool hot materials well below ambient temperature without external energy supplies or moving parts.

I'm not going to claim I fully understand how this all works, and how despite the system's bizarre behavior it still obeys the Second Law, but apparently the key point is that despite the heat energy flowing the "wrong way," the system still gains entropy overall.

Which, I must say, was a bit of a relief.

It's still a pretty fantastic discovery.  "With this very simple technology, large amounts of hot solid, liquid or gaseous materials could be cooled to well below room temperature without any energy consumption," study co-author Andreas Schilling said, in a press release from Phys.org. "Theoretically, this experimental device could turn boiling water to ice, without using any energy."

So don't believe any of the hype that I'm already seeing on dubiously-accurate websites, to the effect that "An Exception Has Been Discovered to the Laws of Thermodynamics!  Physicists Dismayed!  Textbooks Will Have to be Rewritten!"  It's a curiosity, sure, and pretty cool, and sounds like it will have a good many applications, but you shouldn't discount everything you learned in physics class quite yet.