Hybrids to the rescue

Well, I've got good news and I've got bad news, courtesy of a professor at Oxford University.

The good news is that climate change is being taken care of.  All of the worries about ice sheets melting, sea level rise, and stronger storms can be set aside.

The bad news is that in order for all this to happen, humans have to be willing to have sex with aliens.

I wish I was making this up.  Young-hae Chi, a professor of Korean at Oxford, has published a book called Alien Visitations and the End of Humanity, in which he tells us that there are already some human/alien hybrids walking around.  There are four categories: small, tall and bold, insect-like, and scaly with cold, reptilian eyes.

What I'm wondering is, if there are all these hybrids walking around, why haven't I seen any?  Although I have to admit the first two categories are kind of vague, and Stephen Miller could easily fit into the last one.  But at least there aren't any insect people around, which is a good thing, because that'd be fucking creepy. 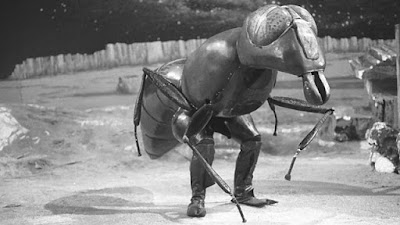 Still from "The Web Planet," from season two of Dr. Who.  Okay, these weren't so much creepy as ridiculous, especially considering the really annoying chirping sound they made.

How exactly this works, or the specifics of how making lots of human/alien hybrid babies is going to stop climate change, Chi never says, and it sounds like he may not be clear on this himself.  "I'm looking for more evidence to support my view," he said.

I'll just bet he is.

Of course, even if there are intelligent aliens visiting the Earth, there's a serious problem with the hybridization claim, and it goes beyond supposing that humans and the aliens have the right combination of orifices and pokey-outy-bits to make it work from a mechanical standpoint.  While it's possible that extraterrestrial life would be DNA-based -- DNA and RNA nucleotides seem to be relatively easy to make abiotically, and are likely to be common in the universe -- it is extraordinarily unlikely that they would read it the same way we do.  The "translation chart," from which you can use the sequence of a messenger RNA molecule to determine the amino acid sequence of the protein it makes, is thought to be arbitrary, and there's no reason why even if there is some RNA-to-protein correspondence on the Planet G'zork, it'd be the same one we use.  (I emphasize the word thought in the previous sentence.  How the translation chart evolved, and whether it actually is arbitrary, is one of the unsolved problems of biological evolution.  If the translation chart was constrained to evolve the way it did, it might be that the decoding process is fairly uniform throughout the universe...  but I doubt it.)

So while I like Mr. Spock and Deanna Troi and B'Elanna Torres as much as the next Trek geek, that sort of thing is pretty certainly impossible.

Still, it'd be nice to do something about climate change.  I mean, our current "leaders" are doing bugger-all, so maybe we should all welcome our alien overlords.  Although I draw the line at having sex with them.  I'm open-minded and all, but I do have my limits.