New from the "Don't You People Even Watch Science Fiction Movies?" department, we have: bioengineers at Cornell University recently created a DNA-based material that has three of the main characteristics of life -- metabolism, self-assembly, and organization.

Oh, and they pitted different versions of the material against each other, and triggered two more: competition and evolution.

The research was published last week in Science: Robotics, in a paper called, "Dynamic DNA Material With Emergent Locomotion Behavior Powered by Artificial Metabolism," authored by a team led by Cornell bioengineer Shogo Hamada.  Working with substances they call DASH (DNA-based Assembly and Synthesis of Hierarchical) materials, they ended up creating something so close to a living thing that even the most ardent life-is-unique-and-unquantifiable proponents are sitting up and taking notice.

What they did is start with 55-nucleotide pair DNA fragments, which were then injected into a machine that provided raw materials (free nucleotides) and a source of energy.  The DNA fragments began to extend, adding new bases to the front end while slowly losing them from the back end, so the entire fragment crept along.  The addition process was faster than the degradation, so eventually there were fragments a few millimeters long -- corresponding to tens of thousands of base pairs.

"The designs are still primitive, but they showed a new route to create dynamic machines from biomolecules. We are at a first step of building lifelike robots by artificial metabolism," said Shogo Hamada, who led the research.  "Even from a simple design, we were able to create sophisticated behaviors like racing. Artificial metabolism could open a new frontier in robotics."

The fragments then began to compete against each other in terms of speed and growth rate, something that has never been seen before in an artificially-created DNA-based material.  "Everything from its ability to move and compete, all those processes are self-contained," said study co-author Dan Luo.  "There’s no external interference.  Life began billions of years from perhaps just a few kinds of molecules.  This might be the same...  [T]he use of DNA gives the whole system a self-evolutionary possibility.  This is huge."

The researchers are currently trying to design ways to have the DNA fragments move toward sources of light, warmth, or sources of nutrients, and away from dangers, not to mention ways to speed up the process to create new generations within seconds.  "We are introducing a brand-new, lifelike material concept powered by its very own artificial metabolism," Luo said.  "We are not making something that’s alive, but we are creating materials that are much more lifelike than have ever been seen before."

I'm not really buying Luo's comment that they're "not making something that's alive," because we don't really have a good working definition of life to start with.  Viruses, commonly referred to as "alive," have no metabolism, are not made of cells, do not respond, and outside of the host do not use energy.  Honestly, they're more like self-replicating chemicals than they are living things.  Then there's the life characteristic "has a limited life span," which doesn't seem to apply to some plants (such as the essentially immortal bristlecone pines) and cancer cell lines (such as the famous HeLa cells).  There's a lot of speculation on whether life even has to be carbon-based -- speculation that's been around for a long time (remember the original Star Trek episode "The Devil in the Dark," about a silicon-based life form that has hydrofluoric acid instead of water as the solvent in its blood?). 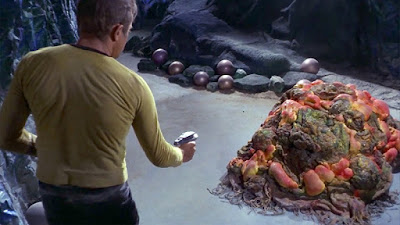 So don't tell me the new Cornell DASH-material isn't alive because it's missing a couple of characteristics of life from the canonical list.  The number of naturally-occurring exceptions is long enough.

And I'm right up there with the folks who think this is amazingly cool -- my background is in evolutionary genetics, after all -- but for cryin' in the sink, doesn't this concern anyone?  Especially if you design DASH-materials that avoid danger and seek out sources of nutrients?  Because I can think of one really great source of nutrients they'd probably be attracted to:

... well, the DNA of some kind of organism.  I think.  Who the hell knows what those things are made of, anyhow?

But my point is, you have one shot at breaking these foreign DNA strands down into their component nucleotides, and that's using the nuclease enzymes in your small intestine.  If they get past that...

Cf. my earlier comment about the new artificial DNA fragments learning how to "avoid danger."

Okay, maybe I'm being alarmist, here.  But -- and I mean this with all due affection -- humans have a really good track record of fucking things up royally, sometimes out of the best of intentions.  So I'm not sure that creating a self-replicating, competitive life form that can evolve to become more efficient at seeking out sources of nutrients is really all that great an idea.

But that's not gonna stop 'em.

Oh, and did I mention that I live ten miles from Cornell University?  At least I'll be amongst the first people to get devoured, and won't have to sit around wondering when the DASH-monsters will arrive.

But I'm gonna try not to worry about it.  After all, we've got enough other things to worry about, such as climate change, the threat of war, and whether today'll be the day Donald Trump decides to open the Seventh Seal of the Apocalypse.