Requiem for a cathedral

As I sit in my office writing this, the Cathedral of Notre Dame de Paris is burning.

It's hard for me to describe what I am feeling.  Mostly, it's a deep, deep grief that something beautiful, something irreplaceable, is gone forever.  It was a place of devotion, a building that had been lovingly cared for and added to for almost nine hundred years, an iconic symbol of the city of Paris.

And now it's gone.

I know that loss is part of the human condition, but this is a big one.  It appears that there isn't even anyone to blame, to take our minds off the grief, as there was with 9/11; the best guess anyone has right now of the cause is an accident during renovation.  That one blunder could deprive the world of something this grand is mind-boggling, but that's what seems to have happened as of the time I'm writing this. 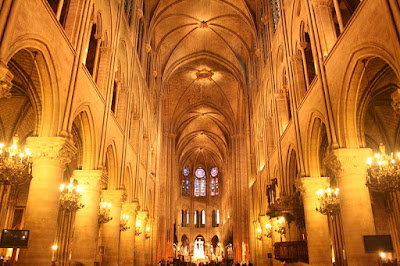 This sense of grief at the destruction of something beautiful has been with me for a long, long time.  My first contact with it happened when I was little -- probably not more than four years old -- and my mom, who was a devoted gardener, presented me with a little packet of forget-me-not seeds.  I was so excited I had to open it and pour them into my hand, and in the process stumbled walking across the yard and dropped them into the grass.  I don't recall what my mother did other than saying "so much for that."  What I do remember is crying inconsolably that something that could have been beautiful was lost.  Every time I've been confronted by loss since then, I remember that little packet of seeds and how final and irrevocable it seemed, how nothing I could ever do would change what had happened, would ever make it all right again, world without end, amen.

And it always launches us into the if-only trap, doesn't it?  When a chance set of circumstances led to the death of our beloved border collie Doolin a few years ago, I spent the next weeks trying to parse what we could have changed had we only seen ahead.  Tiny differences -- waiting two minutes, leaving our house through a different door, taking a different path into our yard -- any one of those would have meant that she and that speeding car would not have been at the same place at the same time.

But we're not prescient, and all of those tiny events only add up in retrospect.

Every time something irrevocable occurs, from the minor to the overwhelming, I can't help thinking if only something could have been done differently.  If only someone hadn't blundered, hadn't had a moment of carelessness, had been paying more attention.

And each time, I am brought to the reality that the if-onlys are pointless.  It's done, it's over, it will never be again.

It's the scale of this one that's so horrible.  Consider the love and wonder of the millions of tourists who visited Notre Dame; the ones (like myself) who wanted to go, always intended to go, but never did; the thousands who devoted their time, effort, and money to the upkeep and renovation of the structure; the countless devout Catholics who considered this a central icon of their deeply-held faith; and you have a glimmer of understanding of what people are feeling right now.

I keep going back to the news stories, watching the videos as if to make sure I've understood right, that Notre Dame is really gone.  A part of me still can't quite believe it.

Of course, I still mourn the burning of the Great Library of Alexandria, so it may be a while before this wound heals.

Firefighters are still trying to save what they can, but the last word I heard was that even the vault might be in jeopardy.  Realistically, I don't see how anything but the stone framework will remain standing, and probably not even all of that.  And if they rebuild it, then what?  What they create might well be beautiful and awe-inspiring, as the 9/11 memorial and the new World Trade Center are, but it won't be what it was.  That will only exist in our remembrance -- and in our art, photography, and writing, which (after all) are our species's collective memory.

I'm not sure what else to say.  It still seems surreal, a blow to our false confidence that the world will always remain as it is.  I will be processing this for a long time, I think.  But for now, I'm going to go look at some photographs of a treasure that is now lost forever.