The black heart of M87

It's awfully easy to get discouraged lately.

The news seems to go from bad to worse every day.  Government corruption, terrorist attacks both here and overseas, every other news story a testament of the amazing ability of Homo sapiens to treat each other horribly.

So when we have a triumph, we should celebrate it.  Because as Max Ehrmann put it, in his classic poem "Desiderata:" "Many persons strive for high ideals; and everywhere life is full of heroism...  With all its sham, drudgery, and broken dreams, it is still a beautiful world."

We got a lovely example of that a couple of days ago, with the revelation that scientists had amassed enough data from the Event Horizon Telescope project to produce the first-ever photograph of a black hole.  It's at the heart of the massive elliptical galaxy M87, in the constellation of Virgo, and is about 54 million light years away.  With no further ado, here's the photo: 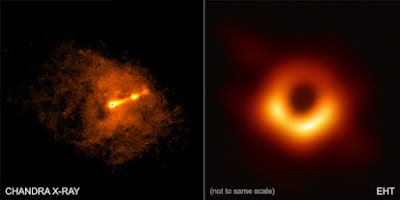 I think the left-hand one -- with less magnification -- is even more amazing, because it shows the black hole in context with its surroundings.  It looks more "real."  But in either case, they're stunning.  The glow comes from matter being sucked into the black hole, being heated up to the point of producing x-rays as a sort of electromagnetic death scream before dropping forever beyond the event horizon.  For the very first time, we're seeing an actual image of one of the most bizarre phenomena in nature -- an object so massive that it warps space into a closed curve, so that even light can't escape.

But even this isn't my favorite image that has come out of this study. 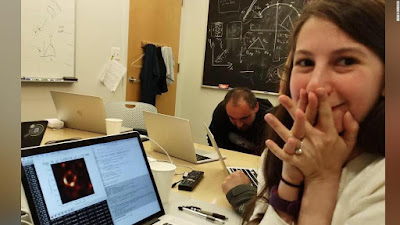 This is Katie Bouman, the MIT postdoc (soon to be starting as an assistant professor at CalTech) whose algorithm made the black hole image a reality.  Bouman responded to her sudden fame with modesty.  "No one of us could've done it alone," she said.  "It came together because of lots of different people from many backgrounds."

Which may well be, but no one is questioning her pivotal role in this groundbreaking achievement.  And what I love about the photograph above is that it perfectly captures the joy of doing science -- what Nobel Prize-winning physicist Richard Feynman called "the pleasure of finding things out."  We now have a window into a piece of the universe that was invisible to us before, and that ineffable feeling is clearly captured in her expression.

There have already been six papers written about this accomplishment, and that's only the beginning.  I find myself wondering what other obscure and fascinating astronomical phenomena Bouman's algorithm could be used to photograph -- and what we might learn from seeing them for real for the first time.  I also wonder what effect that will have on us ordinary laypeople.  The physicists may be comfortable living in the world of their mathematical models (I heard one physicist friend say, "The models are the reality; everything else is just pretty pictures"), but the rest of us need to be more grounded in order to understand.  So what if we were to see more than an artist's conception of things like pulsars, quasars, gamma-ray bursters, type 1-A supernovae?

Kind of a surfeit of wonder, that would be.  But what a way to be overwhelmed, yes?