The view from afar

One of the strangest phenomena in the universe -- and there's a lot of competition in that regard -- is the neutron star.

This is the ultimate fate of stars of mid-range mass -- between 10 and 29 solar masses.  With stars this size, when they exhaust their hydrogen fuel, the outward pressure from fusion of hydrogen into helium stops, and the core collapses, heating it up catastrophically.  The result is a supernova, in which the outer atmosphere of the star is blown away completely.  The remnant of the core is crushed inward, forcing the electrons into the nuclei of the atoms -- literally squeezing all the space out of the matter inside.  The electrons and protons, presumably present in roughly equal numbers, are smashed together, canceling out their net charge and resulting in a great big ball o' neutrons.

I remember learning about this when I took an astronomy class in college, and asking the professor in some astonishment, "So, neutron stars are basically enormous atomic nuclei?"

He said, "Essentially, yes. They're degenerate matter -- made up entirely of neutrons pushed as close together as possible."

There are a couple of mind-blowing results from this.  One is that because ordinary matter is largely empty space and the degenerate matter in neutron stars isn't, neutron stars are dense beyond what you can imagine.  The estimate is that a matchbox-sized chunk of a neutron star would weigh three billion metric tons.  The other thing that is bizarre about them is that because most -- probably all -- stars spin, as the core collapses into a neutron star, reducing a spinning ball that was on the order of two million kilometers in diameter to one that is ten kilometers across, its spin rate increases.  A lot.  The Law of Conservation of Angular Momentum implies that if a spinning body decreases in radius, it has to increase in rotational rate -- something seen when figure skaters bring in their arms, making them spin faster and faster.

But that increase is peanuts compared to what happens here.  One of the first neutron stars discovered, at the center of the Crab Nebula, is spinning thirty times a second.  This makes it seem to flash off and on at that rate as beams of radiation aligned with its magnetic field sweep across the Earth like the beam from a lighthouse.  This is so hard to imagine that when they were first identified by Jocelyn Bell Burnell in 1967, pulsars -- the name she gave to these flashing stars -- were thought to be signals from an extraterrestrial intelligence, and went by the code name LGM (Little Green Men). 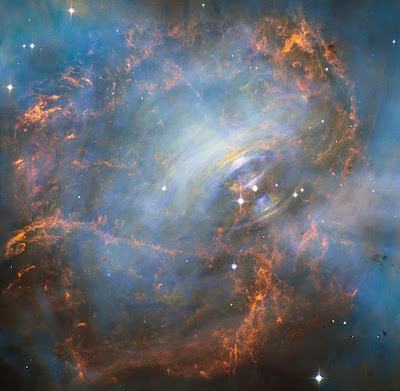 [Image licensed under the Creative Commons ESA/Hubble, Moving heart of the Crab Nebula, CC BY 4.0]

All of this is by way of background for a news story that astronomers have observed, for the second time ever, the merger of two neutron stars.

The first time, you might recall, was almost two years ago, when two neutron stars in tight orbit finally coalesced, resulting in a pulse of gravitational waves that gave powerful support to Einstein's General Theory of Relativity.  This time, the merger was caught on x-ray camera -- as the collision occurred, it caused a shower of x-rays and left behind a single larger neutron star with an unimaginably huge magnetic field -- called a magnetar.

"We’ve found a completely new way to spot a neutron star merger," said Yongquan Xue, astronomer at University of Science and Technology of China and lead author of a paper on the subject that appeared two weeks ago in Nature.  "The behavior of this X-ray source matches what one of our team members predicted for these events."

I haven't told you what's the coolest thing about this.  The colliding neutron stars Xue et al. are studying aren't even in our own galaxy.  What they've done is develop a way to study the collision of two blobs of highly peculiar matter from a distance of six billion light years.

Which is not only an unimaginable distance, but means that the collision happened six billion years ago.  At that point, the Earth hadn't even completely coalesced from the primordial ring of dust and debris that formed it.  Six billion years is just shy of half the time between the Big Bang and now.

So I think you can label my mind blown.

Despite some of the stupid things humans do sometimes, you have to admire our ingenuity.  Sitting on this little speck of rock orbiting an ordinary star in the edge of one arm of an ordinary galaxy, we've found a way to probe the deepest secrets of the cosmos.  Or, as Carl Sagan put it:  "We are a way for the universe to know itself."