A general rule of historical anthropology is that societies only last so long, and inevitably go into decline and are superseded.

The causes, though, are numerous and often mysterious, which is why your typical one-line explanations -- like "classical Rome collapsed because of the invasion by barbarian tribes" -- are inaccurate oversimplifications at best.  Sure, the barbarians didn't help matters, but centuries of misrule, overreach by emperors greedy for land (leading to revolt in outlying provinces they no longer had the military strength to control), unfavorable alterations in climate, and repeated outbreaks of the plague were all major contributors to the downfall of the Pax Romana.

Some civilizations have collapsed more suddenly, and for a few of them, we have no real idea why.  Mycenaean Greece, the "Golden Age of Heroes," went into decline around 1200 B.C.E., and by 1100 was erased entirely, their cities and palaces abandoned.  From a hastily-scrawled clay tablet found at the Palace of Pylos, one of the main Mycenaean strongholds, we get the impression that invasion (in this case by the Dorians, a tribe from northern Greece) may have been a contributor:


The enemy grabbed all the priests from everywhere and without reason murdered them secretly by simple drowning.  I am calling out to my descendants (for the sake of) history. I am told that the northern strangers continued their (terrible) attack, terrorizing and plundering (until) a short time ago.

[It may interest other linguistics geeks that the above passage was translated by Michael Ventris, who along with Alice Kober finally deciphered Linear B -- a script which beforehand was entirely mysterious, even as to what language it represented and which characters stood for which sounds.  In fact, it wasn't even known whether the characters stood for single sounds, syllables, or entire words.  Imagine facing that as a task...]

Anyhow, it's unlikely that the Dorian invasion is the sole reason Mycenae fell.  After all, these are the people who kicked some major ass during the Trojan War; a bunch of invading barbarians wouldn't have successfully eradicated the Mycenaean civilization unless there had been other factors at work as well.

My point is, what destroys civilizations, not to mention what keeps them alive, is seldom a single factor.  But some anthropologists working in South America have identified one that seems to be critical to a society's survival:


Utilizing archaeometric methods, we evaluate the nature of production of feasting events in the ancient Wari state (600–1000 CE).  Specifically, we focus on the fabrication of ceramic serving and brewing wares for the alcoholic beverage chicha de molle.   We examine the source materials used in the creation of these vessels with elemental analysis techniques. We then assess the chemical traces of the residues present in the ceramic pores of the vessels to detect compounds indicative of the plants used in chicha production. While previous research has identified circumstantial evidence for the use of Schinus molle in the production process, this research presents direct evidence of its existence in the pores of the ceramic vessels.  We also assess what this material evidence suggests about the sustainability of the feasting events as a mode of political interaction in the Wari sphere.  Our evaluation indicates that regional resource use in the production of the ceramic vessels promoted locally sustainable raw material procurement for the making of the festivities.  Likewise, drought resistant crops became the key ingredients in the beverages produced and provided a resilient harvest for chicha production that was adopted by successor groups.

"This study helps us understand how beer fed the creation of complex political organizations," said study lead author Patrick Ryan Williams in an interview in Science Daily. "We were able to apply new technologies to capture information about how ancient beer was produced and what it meant to societies in the past...  It was like a microbrewery in some respects. It was a production house, but the brewhouses and taverns would have been right next door...  People would have come into this site, in these festive moments, in order to recreate and reaffirm their affiliation with these Wari lords and maybe bring tribute and pledge loyalty to the Wari state...  We think these institutions of brewing and then serving the beer really formed a unity among these populations, it kept people together." 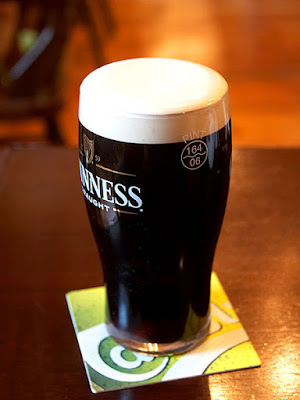 Which makes total sense to me.  I don't know about you, but getting together with friends for a nice pint is often the high point of my weekend.  And yeah, we could get together and have soda and Shirley Temples, but... it just wouldn't be the same, somehow.

So next time you have a beer, keep in mind that you're not just drinking a fizzy, mildly alcoholic beverage, you're actually helping society to cohere.  Which, I think, is a noble thing we're all doing.