Today we have three stories from the "I Swear I Am Not Making This Up" department, all of which revolve around various natural disasters.

In the first, we are featuring a repeat performance by Mark Taylor, the self-styled "Firefighter Prophet."  You may recall that Taylor was in Skeptophilia only two weeks ago, when he claimed that Satan's followers were using chemtrails to stop us from "tuning in to God's frequency."

This time, however, he's outdone himself, which is no mean feat given the fact that most of what he says sounds like he's spent too much time jumping on a pogo stick in a room with low ceilings.  Just two days ago, Taylor felt like he had to comment on the outbreak of tornadoes in the American Midwest, and tweeted the following:


Coincidence that Missouri was hit with Tornadoes right after they signed the abortion bill?  That same line of storms had Tornado warning in DC yesterday right before Trump gave ok for declass.  The enemy is trying to intimidate.  It won’t work, your [sic] a defeated enemy!  Victory!

So, Satan is sending tornadoes to intimidate the Christians (and also Donald Trump, who is about as Christian as Kim Jong-Un), and coincidentally sends tornadoes to places that already get lots of tornadoes, during the part of the year that's the peak season for tornadoes?  You know, intimidation-wise, I think Satan would be more advised to do something unexpected, like having a volcano erupt in downtown Omaha, or a blizzard in Miami, or a hurricane in Utah, or something.  Saying, "Fear my wrath!  I will make sure that what always happens to you continues to happen!" really lacks something, evil-wise. 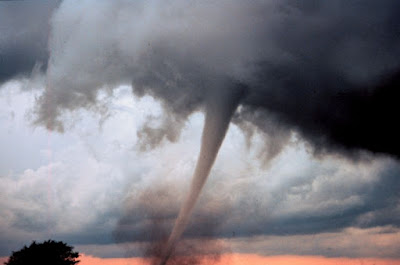 [Image is in the Public Domain, courtesy of the National Oceanic and Atmospheric Administration]

Next we have news out of Kentucky, where the "Ark Encounter" museum, designed to convince children that the mythological explanations of a bunch of illiterate Bronze-Age sheepherders somehow supersedes everything we know from modern science, has run into a legal snafu.  Apparently they are suing their insurance carriers because of refusal to pay out a claim...

... for damage from flooding.

I like to think of myself as a compassionate guy, but my exact reaction when I read this was:

So you need help covering the expenses of damage from a two-day rainstorm?  I thought this particular design was good for at least forty days and forty nights.  And besides, don't they call natural disasters like this "Acts of God?"

Seems a little presumptuous to expect compensation from something like that.

Or maybe, if you apply Mark Taylor's "logic" to this situation, it was just Satan trying to intimidate Ken Ham et al.  In which case Ham should just yell, "Your [sic] defeated, Satan!  Victory!" and call it good.

Last, we have an actual warning sent out by the Lawrence (Kansas) Police Department, that you should not try to stop a tornado by shooting at it.

Which you would think would be obvious.  After all, air is pretty impervious to bullets, and a tornado is basically just a big spinning blob of air.  Plus, there's the problem that since it's spinning really fast, if you shoot into it, you're likely to find that five seconds later, the tornado has flung the bullet right back at you.  After all, tornadoes are capable not only of massive devastation, but of whirling quite heavy objects up into the air, which is why if your house is hit by a tornado, it not only has to withstand the strength of the wind, but being hit by an airborne Buick.  Whipping a little thing like a bullet around, and hurling it right back at Bubba and his friends, would be child's play.

It's kind of amazing to me that anyone would have to make a point of telling people not to do this.  What's next?  "If you're trapped by a flood, beating the rising waters with a stick is not going to help."  "Do not attempt to stop a lava flow by spraying it with insecticide."  "You should seek medical help rather than trying to cure your diseases by drinking bleach."

Wait.  People actually did have to be warned about the last one.  Never mind.

You know, maybe I'm remembering incorrectly, but I do not recall bizarre stuff like this happening when I was a kid.  I'm thinking that once again we have evidence we're living in a giant computer simulation, but the aliens running it have gotten bored and/or drunk and now are just fucking with us:


"Let's see what happens if we make a narcissistic, nearly illiterate reality TV star lose the popular election, but win the presidency anyhow!"

"Oh, hell yeah!  That was great!  How about, let's have people in England attempt to generate popular support for left-wing candidates by throwing milkshakes at politicians!"

*Ha!  Did you see Nigel Farage's face?  Oh, hey, I've got one.  Let's come up with a song that's super annoying, more annoying even than "Copacabana" and "The Piña Colada Song" put together.  Only we'll target it to kids, but we'll get everyone to play it because there'll be a really stupid video to go with it.  It'll be called "Baby Shark."  That and "do do do do do" will be about the only lyrics."

*aliens fall off their chairs laughing*

Well, I suppose as long as someone is amused by how absurd humans are.  On the other hand, our species's reputation for idiotic behavior probably wouldn't be harmed any if Mark Taylor would just shut the hell up.