The ability to swim didn't evolve until amazingly late, especially considering that for the first two billion years, life on Earth was pretty much confined to the oceans.

It wasn't until the Devonian Era, which began 420 million years ago, that swimming animals dominated the seas.  There were a few swimming species prior to that, but far and away the most common life forms were benthic -- confined to the sea floor -- or planktonic, free-floating and at the mercy of the currents.

Then, according to the conventional wisdom, something changed.  It's been nicknamed the "Devonian nektonic revolution" (nektonic means actively swimming).  But a recent piece of research suggests that it may not have been that simple.

Christopher Whalen and Derek Briggs, of the Yale University Department of Geology and Geophysics, did a thorough analysis of what is known from the fossil record, and looked at how the morphology of animals indicated whether they were swimmers, benthic, or planktonic.  And their results suggests that the "Devonian nektonic revolution" never happened -- swimming evolved in the Cambrian Era, a hundred or so million years earlier, and swimmers experienced a gradual increase as they outcompeted more sedentary forms.  Throughout that time, Whalen says, "the water column was slowly filling with larger, more actively swimming animals...  By the end of the Paleozoic, the oceans looked more like the oceans we know today."

Although some things have changed since then.  Fortunately.  Consider the six meter long, one ton Devonian top-tier predator, Dunkleosteus, surely one of the most badass fish ever evolved.

I'm just as happy swimming in an ocean that doesn't have these mofos swimming around, thank you very much.

Another cool paper about the life aquatic comes from Arizona State University, where behavioral ecologist Nobuaki Mizumoto did some analysis on a unique fossil that captures an entire school of tiny fish, and determined that schooling behavior had evolved by the Eocene Epoch (50 million years ago) and even back then operated by the same "rules of attraction and repulsion" that govern schooling and flocking today -- keeping an optimal distance from your near neighbors, just right to avoid collisions but benefit from the predator-avoidance aspect of sticking with the group. 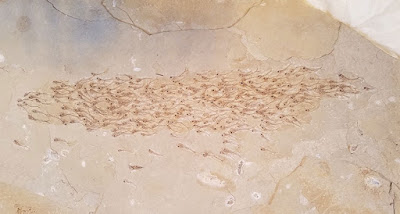 It's uncertain what killed the entire school, but as the fossil is in sandy limestone, it could be that an underwater dune or hill face collapsed and smothered them.  What is remarkable is that it apparently happened quickly enough that they were preserved pretty much in situ -- essentially in their original positions in the school.

Mizumoto, along with co-authors Shinya Miyata and Stephen Pratt, write:


We found traces of two rules for social interaction similar to those used by extant fishes: repulsion from close individuals and attraction towards neighbours at a distance.  Moreover, the fossilized fish showed group-level structures in the form of oblong shape and high polarization, both of which we successfully reproduced in simulations incorporating the inferred behavioural rules.  Although it remains unclear how the fish shoal's structure was preserved in the fossil, these findings suggest that fishes have been forming shoals by combining sets of simple behavioural rules since at least the Eocene.  Our study highlights the possibility of exploring the social communication of extinct animals, which has been thought to leave no fossil record.

It's unusual when a fossil allows us to infer anything about behavior -- patterns of tracks can tell us about whether an animal traveled in groups, but it's a rare fossil that gives us anything but guesses.  So this study is unique in that it gives us a window into how this tiny species of Eocene fish behaved when it was alive.

So that's our investigation into the paleontology of swimming.  Amazing how much we can tell from a careful analysis of fossils -- giving us a window into a world that's been gone for millions of years.