Science, the arts, and creativity

'Tis the season for school budget votes, when school districts find out how much they're going to have to cut from the instructional program, and younger, low-seniority teachers find out if they're actually going to have a job in September.

It's a fraught time of year for anyone in education, and I say that even though it's been a very long time since I've had to worry about my job, and as a "core teacher" (more about that in a moment) I've never had any concerns about my subject being cut.  But when I see the effect this has on other teachers and the morale of the school in general, it breaks my heart.

What is even more troubling is the distinction being made between "core" classes and electives, sometimes called "specials."  The attitude is that the "core" -- English, Social Studies, Math, and Science/Technology -- is somehow more important than the other classes.  And calling the other classes "specials" is disingenuous at best; to quote Eric Idle's character in Monty Python and the Search for the Holy Grail, "You're not foolin' anyone, you know."  Whenever there are budget cuts, the "specials" are the first to go.  The message is that we can do without art and music and other electives, but everything else is sacrosanct. 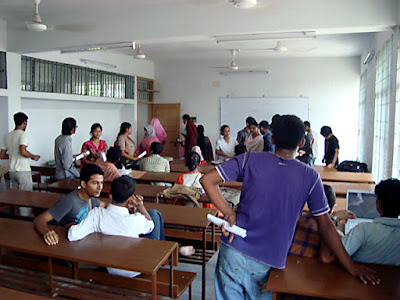 What's tragic about this is that the opposite is apparently closer to the truth.  Educational researcher Andreas Schleicher just addressed the UK House of Commons last week to bring to light this very issue -- that not only are the arts and music and so on critical because they're creative and fun and are often the high point of students' days, but they give students essential skills for flourishing in today's job market.  And since that's ordinarily the one thing the politicians accuse schools of failing at, this got some people to sit up and take note.

"I would say, in the fourth industrial revolution, arts may become more important than maths," Schleicher said.  "We talk about ‘soft skills’ often as social and emotional skills, and hard skills as about science and maths, but it might be the opposite...  the true ‘hard skills’ will be your curiosity, your leadership, your persistence and your resilience."

Schleicher also spoke out against the drill-and-test mode that is becoming the norm in the United States, and apparently in the UK as well.  He suggests that our desperation to convert everything into numbers -- what the educational policy wonks call "measurable outcomes" -- has led us to emphasize the subjects in which that's easier.  Math and science, especially, can be focused on "getting the right answer," giving you an easy metric to measure success -- if that's the kind of success you're looking for.

"When you look at the types of tasks that British students are doing better [than other countries], they are more those that are associated with the past than the future – the kind of things that are easy to teach and easy to test," Schleicher said.  "It is precisely those things that are easy to digitise...  [But] the modern world doesn’t reward you for what you know, but for what you can do with what you know."

In other words, the creativity you can bring to bear upon a problem, and your ability to see connections in disparate realms.  "Lateral thinking," it's often called.  But this is the kind of thing we educators usually fail to teach -- because it's hard to incorporate into your typical lesson, and hard to measure.  Much simpler just to keep students thinking inside the box, thinking that every problem has exactly one right answer, and (to quote another brilliant educational researcher, Sir Ken Robinson), "It's at the back of the book.  But don't look."

The saddest part, for me as a science educator, is that science itself is not usually taught as a creative endeavor.  In many classrooms, science is a list of vocabulary words and standardized solution methods, both of which could be memorized and regurgitated without any real understanding taking place.  But the truth is, the best science is highly creative, and requires a leap, questioning assumptions and looking at every piece of our understanding in the light of curiosity and exploration.

A classic example is Albert Einstein.  Before Einstein's time, physicists had been puzzled that all the experiments done to determine the speed of light found that it was constant -- that its speed didn't vary depending on whether you were moving away from or toward the light source.  How on earth could that be?  No other wave or particle acted that way.  So they came up with convoluted ways around what they referred to as "the problem of the constancy of the speed of light."

Einstein turned the whole thing on its head by saying, "What if it's not a problem, but simply inherent in the behavior of light itself?"  So he started from the assumption that light's speed is constant, in every frame of reference, even if you were heading toward the light source at 99% of the speed of light.

The result?  The Special Theory of Relativity, and the opening up of a whole new realm of physics.

So Schleicher is exactly right.  We should be increasing arts and music education in schools, not cutting it.  "STEM" curricula and other "core" subjects are important, don't get me wrong; but the emphasis they get is seriously unbalanced.  And for heaven's sake, let's stop considering something real if we can test it and measure it.  I'll end with another quote, this one from writer, researcher, and professor Robert I. Sutton: "To foster creativity, you must reward success and failure equally, and punish inactivity."