A consummation devoutly to be wished

When I was in college, I had an eight a.m. calculus class with a woman who used to drag herself in, large coffee in her hand, looking like death warmed over.  The first time this happened, I thought she'd just pulled an all-nighter either studying or partying -- both common occurrences in college -- but then I noticed it was day after day.  The poor woman never looked wide awake, and always seemed just this side of miserable.

Finally, being the subtle and compassionate person you all know me to be, I said to her, "What the hell is wrong with you?", or words to that effect.

She explained to me that she had serious sleep issues.  She'd get back to her dorm from her last class in the afternoon, still feeling exhausted, but then she'd get a second wind in the early evening.  Come a reasonable bedtime -- say, ten-thirty or eleven -- she was wide awake.

"I don't even bother going to bed," she told me.  "I tried it, more than once, and lay there for hours staring at the ceiling.  Now I just get up and try to be productive."

Until about four-thirty or five in the morning, when she'd finally feel tired.  Then she'd go to sleep, and her alarm would go off at six, and she'd start the whole cycle again -- with about an hour's worth of sleep.

I didn't find out until much later that what she was suffering from has a name; circadian dysrhythmia.  Basically, it's when your biological clock is completely out of sync with the rest of the world.  It's a little like a permanent case of jet lag.  And sadly, even now, forty years later, it's still remarkably resistant to treatment.

It's been the conventional wisdom for some time that circadian rhythms are mediated through a part of the brain called the hypothalamus.  And this is clearly part of the answer; sleepiness is correlated with increased activity in the anterior part of the region, and an increase in the hypothalamic production of the neurotransmitter gamma amino-butyric acid (GABA), which has an inhibitory effect on neural excitation. 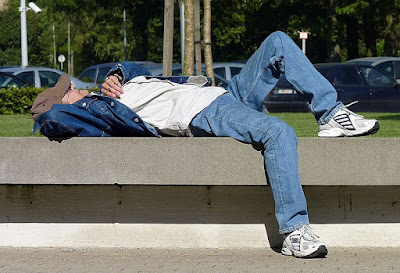 But two new papers, published simultaneously last week in the journal Cell, have shown us that things may not be that simple.  (Are they ever?)  Both studies were done at the University of California - Irvine, and have shown that the network of internal clocks that regulates our metabolism, activity, alertness, and other cyclic behaviors are not limited to the brain -- that other parts of the body also have significant contributions to modulating our daily cycles.

In the first, titled, "BMAL1-Driven Tissue Clocks Respond Independently to Light to Maintain Homeostasis," researchers found that a chemically-driven clock exists... in our skin cells.  The authors write:


Circadian rhythms control organismal physiology throughout the day.  At the cellular level, clock regulation is established by a self-sustained Bmal1-dependent transcriptional oscillator network [a cyclic rise and fall of gene activity associated with light levels].  However, it is still unclear how different tissues achieve a synchronized rhythmic physiology.  That is, do they respond independently to environmental signals, or require interactions with each other to do so?  We show that unexpectedly, light synchronizes the Bmal1-dependent circadian machinery in single tissues in the absence of Bmal1 in all other tissues.  Strikingly, light-driven tissue autonomous clocks occur without rhythmic feeding behavior and are lost in constant darkness.

Maybe not so shocking, given that our skin is at least partly exposed to the light.  What is more surprising is the second paper, which found that a light-dependent circadian rhythm takes place in our livers:


Mammals rely on a network of circadian clocks to control daily systemic metabolism and physiology.  The central pacemaker in the suprachiasmatic nucleus (SCN) is considered hierarchically dominant over peripheral clocks, whose degree of independence, or tissue-level autonomy, has never been ascertained in vivo.  Using arrhythmic Bmal1-null mice, we generated animals with reconstituted circadian expression of BMAL1 exclusively in the liver (Liver-RE)...  [R]hythmic clock gene expression is lost in Liver-RE mice under constant darkness.  Hence, full circadian function in the liver depends on signals emanating from other clocks, and light contributes to tissue-autonomous clock function.

"The results were quite surprising," said Paolo Sassone-Corsi, who co-authored both studies.  "No one realized that the liver or skin could be so directly affected by light...  The future implications of our findings are vast.  With these mice, we can now begin deciphering the metabolic pathways that control our circadian rhythms, aging processes and general well-being."

It's undeniable that sleep plays a central role in both mental and physical health, and that the vast majority of us don't get sufficient sleep either in quantity or quality.  The more scientists find out about how our sleep cycles and other circadian rhythms are modulated, the greater the likelihood there'll be a treatment for people like my long-ago college acquaintance -- and even for simple insomniacs like myself.