The classic account of the origins of Native Americans is that during the last Ice Age, the seas were lower, and what is now the floor of the Bering Sea was a broad, flat valley.  This allowed people to cross from Siberia into Alaska, and when the weather warmed and the seas rose, this cut off the "land bridge" and left the migrants North Americans for good.

Some cool new research out of the University of Copenhagen has shown that this story is a vast oversimplification, and that what actually happened is considerably more complex than a one-way hike from west to east.

In a paper in Nature called "The Population History of Northeastern Siberia Since the Pleistocene," by lead author Martin Sikora and no less than 53 co-authors, we find out that there wasn't just a single wave of migrants, and there was considerable back-and-forth, even after the seas flooded in and cut Alaska off from Siberia.  Sikora's team analyzed the DNA extracted from teeth from 34 different burials, from Finland all the way across to northeastern Siberia, and compared this to genetic material from Native American populations in northwestern North America.

What Sikora found is that there were several surges of migration across the "Bering Land Bridge," starting over thirty thousand years ago.  Each new wave of travelers mixed and mated with the preceding group of settlers -- and then some of them went back the other direction, settling in northeastern Siberia (where many of their descendants still live).  The authors write:


Northeastern Siberia has been inhabited by humans for more than 40,000 years but its deep population history remains poorly understood.  Here we investigate the late Pleistocene population history of northeastern Siberia through analyses of 34 newly recovered ancient genomes that date to between 31,000 and 600 years ago.  We document complex population dynamics during this period, including at least three major migration events: an initial peopling by a previously unknown Palaeolithic population of ‘Ancient North Siberians’ who are distantly related to early West Eurasian hunter-gatherers; the arrival of East Asian-related peoples, which gave rise to ‘Ancient Palaeo-Siberians’ who are closely related to contemporary communities from far-northeastern Siberia (such as the Koryaks), as well as Native Americans; and a Holocene migration of other East Asian-related peoples, who we name ‘Neo-Siberians’, and from whom many contemporary Siberians are descended.  Each of these population expansions largely replaced the earlier inhabitants, and ultimately generated the mosaic genetic make-up of contemporary peoples who inhabit a vast area across northern Eurasia and the Americas.

This study adds to some earlier work, published late last year, that found that the movement of those migrants once they got to North America was equally complex, going in (at least) three waves as they colonized the continent southward and eastward, with the second wave carrying people all the way to Tierra del Fuego.  This blows a neat hole into the idea that "Native American" is some kind of monolithic race of people all of whom are closely related -- which anyone who knows about the very disparate groups of Native American languages would find completely unbelievable anyhow. 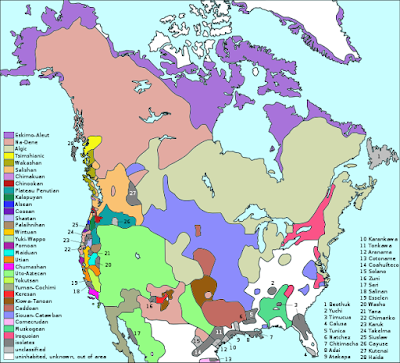 So as usual, reality turns out to be both more complicated and more interesting than the accounts you usually hear.  The walkabout taken by the ancestors of the indigenous inhabitants of the Americas was like most patterns of human movement; messy, unpredictable, with new groups mixing with old and the blended groups backcrossing and mixing with the ones who were left behind.  But this is what makes population genetics fascinating, isn't it?  It gives us a lens through which to view our own origins, and causes us to question the definition of terms like "race" that a lot of us think we understand -- but which, on analysis, turn out not to mean anything even vaguely scientific.