Taking the temperature of the universe

There's something compelling about the things in our universe that are on a wildly different scale than we are.  The very tiny -- subatomic particles, atoms, even things as (comparatively) large as molecules -- boggle our minds by their bizarre behavior, a body of knowledge collectively known as quantum mechanics.  Likewise, the very large bowls us over by our positions in a cosmos that makes even the most arrogant and human-centric of us feel insignificant.

It's the large end of the scale that's been a fascination of mine for some time.  I remember as a teenager running into the classic 1977 video Powers of Ten, that starts hovering a meter above the hand of a sleeping man in a park, and then moves away from him at an increasing speed, moving ten times faster every ten seconds.  Before much time has elapsed -- and the whole video is under ten minutes long -- we are outside of the known universe, and our own "Local Group" of galaxies is a mere dot in the center of the screen.  Then we dive back down toward the sleeping man, this time covering ten times less distance every ten seconds, and finally are centered on a single proton in a carbon atom in one of his DNA molecules.

Since 1977, of course, we've learned a lot more about each end of the scale.  We now know that the universe itself is anisotropic -- the stars and galaxies are not uniformly distributed across space, but exists in superclusters and filaments, with enormous empty spaces in between -- accurately if spookily called "cosmic voids."  (One of them, the Boötes void, is nicknamed "The Great Nothing," and is so large that if the Sun was at the center of it, the night sky would be completely black, and we would not have had a telescope powerful enough to find out about the existence of other stars until the 1960s.)

A piece of research published this week in the journal Astronomy and Astrophysics has added another piece to our understanding of the structure of the universe, but raised a number of questions as well -- which, of course, good research should always do.

The paper, entitled "Isotropy and Statistics of the Cosmic Microwave Background Radiation," is an analysis of data from the Planck spacecraft, which has taken measurements for years of the radiation spread across the cosmos that is the remnant of the first flash of light at the moment of the Big Bang.  You'd expect that it would be fairly uniform -- given that the Big Bang kind of happened everywhere at once -- but the curious result of the research is that there is a "warm hemisphere" and a "cold hemisphere" of the universe, as measured by the deviation of the temperature from the average of only slightly above absolute zero -- and weirder still, that in the middle of the "warm hemisphere" is a giant cold spot. 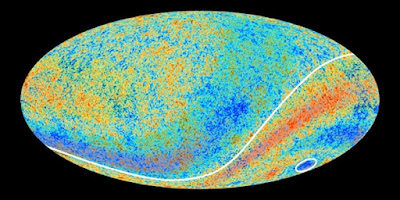 What's the most bizarre about this is that the data hovers right on the edge of statistical significance, but the pattern has been detected more than once and does not seem to be a random fluctuation.  If it's correct, it'll force a significant rethinking of our understanding of the structure of the universe -- and how it all started.

So there's your moment of "geez, we are really tiny" for today.  On the Planck map picture above, the entire Milky Way -- 53,000 light years across, composed of about 250 billion stars -- is a single minuscule dot.  All of which makes our little struggles on this Pale Blue Dot seem rather inconsequential, doesn't it?