Sometimes I run into a piece of scientific research that's so odd and charming that I just have to tell you about it.

Take, for example, the paper that appeared in ACS Nano this week, that ties together two of my favorite things -- biology and music.  It has the imposing title,  "A Self-Consistent Sonification Method to Translate Amino Acid Sequences into Musical Compositions and Application in Protein Design Using Artificial Intelligence," and was authored by Chi-Hua Yu, Zhao Qin, Francisco J. Martin-Martinez, and Markus J. Buehler, all of the Massachusetts Institute of Technology.  Their research uses a fascinating lens to study protein structure: converting the amino acid sequence and structure of a protein into music, then having an AI software study the musical pattern that results as a way of learning more about how proteins function -- and how that function might be altered.

What's cool is that the musical note that represents each amino acid isn't randomly chosen.  It's based on the amino acid's actual quantum vibrational frequency.  So when you listen to it, you're not just hearing a whimsical combination of notes based on something from nature; you're actually hearing the protein itself. 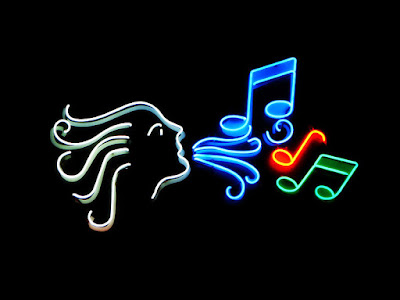 In an article about the research in MIT News, written by David L. Chandler, you can hear clips from the Yu et al. study.  I recommend the second one especially -- the one titled "An Orchestra of Amino Acids" -- which is a "sonification" of spider silk protein.  The strange, percussive rhythm is kind of mesmerizing, and if someone had told me that it was a composition by an avant-garde modern composer -- Philip Glass, perhaps, or Steve Reich -- I would have believed it without question.  But what's coolest about this is that the music actually means something beyond the sound.  The AI is now able to discern the difference between some basic protein structures, including two of the most common -- the alpha-helix (shaped like a spring) and the beta-pleated-sheet (shaped like the pleats on a kilt -- because they sound different.  This gives us a lens into protein  function that we didn't have before.  "[Proteins] have their own language, and we don’t know how it works," said Markus Buehler, who co-authored the study.  "We don’t know what makes a silk protein a silk protein or what patterns reflect the functions found in an enzyme.  We don’t know the code."

But this is exactly what the AI, and the scientists running it, hope to find out.  "When you look at a molecule in a textbook, it’s static," Buehler said.  "But it’s not static at all. It’s moving and vibrating. Every bit of matter is a set of vibrations.  And we can use this concept as a way of describing matter."

This new approach has impressed a lot of people not only for its potential applications, but from how amazingly creative it is.  This is why it drives me nuts when people say that science isn't a creative process.  They apparently have the impression that science is pure grunt work, inoculating petri dishes, looking at data from particle accelerators, analyzing rock layers.  But at its heart, the best science is about making connections between disparate ideas -- just like this research does -- and is as deeply creative as writing a symphony.

"Markus Buehler has been gifted with a most creative soul, and his explorations into the inner workings of biomolecules are advancing our understanding of the mechanical response of biological materials in a most significant manner," said Marc Meyers, professor of materials science at the University of California at San Diego, who was not involved in this work.  "The focusing of this imagination to music is a novel and intriguing direction.  his is experimental music at its best.  The rhythms of life, including the pulsations of our heart, were the initial sources of repetitive sounds that engendered the marvelous world of music.  Markus has descended into the nanospace to extract the rhythms of the amino acids, the building blocks of life."

What is most amazing about this is the potential for the AI, once trained, to go in reverse -- to be given an altered musical pattern, and to predict from that what the function of a protein engineered from that music would do.  Proteins are perhaps the most fundamental pieces of living things; the majority of genes do what they do by making proteins, which then guide processes within the organism (including frequently affecting other genes).  The idea that we could use music as a lens into how our biochemistry works is kind of stunning.

So that's your science-is-so-freaking-cool moment for the day.  I peruse the science news pretty much daily, looking for intriguing new research, but this one's gonna be hard to top.  Now I think I'm going to go back to the paper and click on the sound links -- and listen to the proteins sing.