Titans of the ocean

As far as scary critters go, you'd have to look hard to find one scarier than the elasmosaurs.

If you've never seen an artist's reconstruction of one of these beasts, picture something like the body of a sea turtle, with an incredibly long neck and snake-like head, with lots of big, nasty, pointy teeth.  The largest ones reached a length of twelve meters, and a weight of several tons.  The conventional wisdom is that they "mostly ate crustaceans and mollusks," but my feeling is that if they encountered a swimmer, the result would be something like what happened in the movie Jaws, only worse. 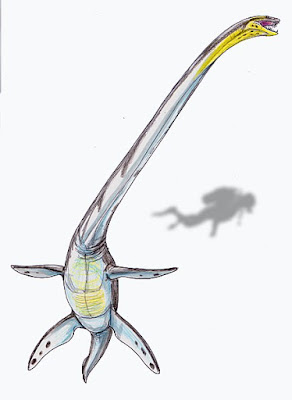 Fortunately for us, they are one of the groups that ran afoul of the Chicxulub Meteorite Impact 66 million years ago, and they all became extinct, unless you believe in the Loch Ness Monster, which would definitely be an elasmosaur if it actually existed.

This comes up because last week, paleontologists announced that they have unearthed a nearly-complete fossil of the largest-known elasmosaur, Aristonectes, which when alive would have been thirteen meters long and weighed twelve tons.  The fossil was found on Seymour Island in 1989, but was only excavated now because Seymour Island is at the tip of the Antarctic Peninsula, and is windswept, cold, hostile, and hard to get to even during the brief Antarctic summer.  The research team, led by José O’Gorman, a paleontologist with the National Scientific and Technical Research Council of Argentina (CONICET) who is based at the Museum of La Plata near Buenos Aires, has finished the excavation and submitted their results to the journal Cretaceous Research.

What to me is most fascinating about this specimen -- besides its sheer size, which is eye-opening enough -- is that it dates to only thirty thousand years before the K-T Extinction, which (palenontologically speaking) is barely any time at all.  So these big guys were thriving (and diversifying) right up to the moment the big crash occurred -- further evidence that the meteorite was the trigger to the entire extinction event.

O'Gorman says that the work to recover the specimen was grueling.  It began in 2012, proceeding at a snail's pace because the site was only accessible a couple of weeks a year, in late January and early February, and sometimes not even then if there was an unexpected storm. "The weather is one of the problems," O'Gorman said.  "The weather controls all.  Maybe one day you can work, and the next day you cannot because you have a snowstorm."

But their painstaking labor has finally paid off, and given us a picture of a truly awesome critter who was swimming around the oceans right on the verge of one of the "Big Five" extinction events.  Like I said, as a swimmer and scuba diver, I'm just as happy they're not around any more, but getting a glimpse of one of the largest aquatic predators the Earth has ever produced is enough to leave me in awe.