A time capsule in amber

Today we're going to turn away from the generally atrocious stories in the news and focus on some science that's just plain cool.

You probably all know by now that bird are dinosaurs.  Not that they're related to, or descended from, dinosaurs; they are dinosaurs, belonging to the clade Dinosauria of the Phylum Chordata, specifically a group called the saurischians ("lizard-hipped" dinosaurs).  As such, they're cousins to such behemoths as Tyrannosaurus rex, and also velociraptors, made famous by Jurassic Park.  (Nota bene: although pack hunters, they probably weren't smart enough to get out of a locked freezer.)

So think of that next time you see a sparrow flitting about.  That, my friends, is a flying dinosaur.

This comes up because of the recent discovery of a bird leg preserved in amber.  These sorts of fossils are pretty uncommon, so this one has really stirred the paleontologists up.  It dates to about 98 million years ago, putting it dead center in the Cretaceous Period, which ended with a (literal) bang, the double whammy of a huge meteorite collision (Chicxulub) and a stunningly huge volcanic eruption (the Deccan Traps).

This bird, however, was comfortably positioned 42 million years before any of that nasty stuff happened, although that probably wasn't much consolation when he got mired in tree sap and probably either starved or was picked off by a predator, leaving his leg encased for us to find.  Here's the fossil itself: 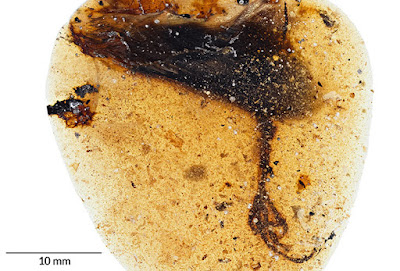 And a reconstruction by artists, courtesy of the journal Current Biology: 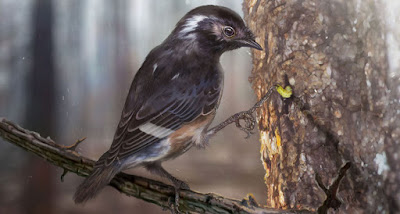 I do have to wonder a little about the reconstruction, given that this species -- christened Elektrornis chenguangi ("elektron" is Greek for "amber") -- belongs to a group called enantiornithines.  Speaking of interesting derivations; enantiornithine is Greek for "mirror-image bird," because the group had a reversed orientation of the shoulder articulation.  Anyhow, the reconstruction seems to ignore one of the most prominent features of this group to our 21st-century picture of what a bird should look like:

Not great big nasty pointy ones, no, but teeth nonetheless.  Here's a skull of a different enantiornithine, Bohalornis: 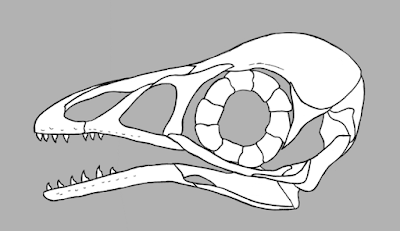 So a little more ferocious-looking than the artist's reconstruction might indicate.

The weirdest thing about Elektrornis specifically is that it had a greatly elongated middle toe (which you can see not only in the reconstruction but in the photograph of the fossil itself).  What it was used for is unknown, although the team that did the research -- Lida Xing, Jingmai K. O’Connor, Luis M. Chiappe, Ryan C. McKellar, Nathan Carroll, Han Hu, Ming Bai, and Fuming Lei, of the China University of Geosciences, the Chinese Academy of Sciences, the Natural History Museum of Los Angeles, the University of Regina, and the University of New England (Australia) -- speculate that it probably was an adaptation for feeding or for grasping.

Not, probably, for flipping off other dinosaurs, which was my first thought.  But then, I'm a non-specialist.

So a pretty cool discovery in China, elucidating the origins of modern birds and their ties to extinct, more conventionally dinosaur-like species.  Makes me kind of sorry the big toothy birds are gone.  That would add a whole new level of excitement to birdwatching, wouldn't it?