Hyena-pigs and fish with lungs

Today we're going to look at two new bits of research from the field of paleontology that highlight how evolution can produce some really bizarre critters.

First, we have a discovery in Oregon of a fossil mesonychid.  The mesonychids were some of the first big mammalian predators, originating in the Paleocene Epoch (right after the K-T Extinction), reaching a peak in the Eocene, and finally going extinct in the early Oligocene, giving them a not-inconsequential run of 33 million years.  These things were seriously scary-looking.  Consider, for example, Mesonyx, which is the "type-species" that gives the entire group its name: 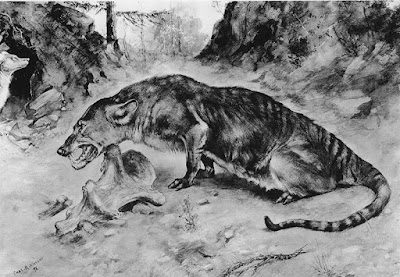 I haven't told you the weirdest thing about the mesonychids, though -- which is that their nearest living relatives appear to be whales.  Perhaps not so strange, though, when you see a reconstruction of Ambulocetus, one of the ancestors of today's cetaceans:

Then again, the closest extant relatives of whales are the artiodactyla -- including pigs, deer, and hippos -- so it's not surprising that species can show some unexpected affinities.

Anyhow, this comes up because of a discovery in the John Day Fossil Beds in Oregon of a mesonychid that had never been found in the northwestern United States before.  Called Harpagolestes uintensis, it was the size of a bear, but had proto-hooves, not to mention big, nasty, pointy teeth.  "It kind of looked a little piggy,” said Nick Famoso, chief of paleontology and museum curator at the John Day Fossil Beds National Monument.  "It has a pig-like skull and jaw, it had hooves.  But it was definitely out there eating meat and bone...  Imagine a hyena, crossed with a pig.  And that’s kind of what this animal would have looked like."

So thanks for an image that will haunt my nightmares.

Then there's the discovery that is the subject of a paper in last month's Bulletin of the American Museum of Natural History, by Maureen O'Leary et al., that describes some new discoveries in sedimentary deposits in Mali.  Back in the Cretaceous Period, Mali was mostly underwater -- there was a (relatively) shallow seaway connecting what is now the Mediterranean Sea to the Atlantic Ocean, right across north Africa.  The fossil beds from these strata have proven to be extremely rich and diverse, but getting to them (and then back home safely) is no mean feat given the unrest, terrorism, and general lawlessness prevalent in that part of the world.

But O'Leary and her team have brought back a picture of a world where what is now the Sahara Desert was a salt-water channel bordered by lush mangrove swamps, and probably looked more like Central America than Libya.  The last expedition to Mali -- and the subject of the paper -- describes the discovery of enormous catfish and a species of sea snake that got to be twelve meters long.

But the weirdest thing they discovered there was an extremely creepy species of lungfish, reconstructed as follows: 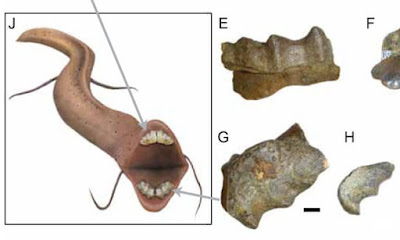 Is it just me, or is this thing just a little too close to the Jagrafess from the Doctor Who episode "The Long Game?" 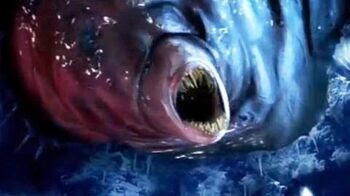 So there are our cool discoveries from the world of paleontology for today.  I know prehistoric life is fascinating, but myself, I'm just as happy to know I can go outside and not be torn apart by a hyena-pig, bitten by a twelve-meter-long snake, or chomped on by something that looks like a giant worm with human teeth.  Call me risk-averse, but there you are.

Posted by Gordon Bonnet at 5:01 AM