There are few figures in the history of magical thinking more famous, or more polarizing, than Aleister Crowley.

He was a member -- eventually a leader -- of esoteric societies like the Order of the Golden Dawn and Ordo Templi Orientis, and eventually founded one of his own.  After all, once you're a member of an esoteric society, you generally find it's not so esoteric after all, and either have to find one even more esoteric or else make one up.

Some time around 1900 Crowley took the latter option, and named his society Thelema, the Greek word for "will" -- as the whole idea of the thing was "do what you will," especially in matters of sex, which fit beautifully with Crowley's apparent obsession with fucking anyone of either gender who would hold still long enough.

Thelema as an abbey (located in Cefalú, on the island of Sicily) was abandoned in 1923 after Mussolini decided that Crowley wasn't exactly the sort of person he wanted in Italy, and had him and his followers deported en masse.  Today it's more or less a ruin, but still a mecca for practitioners of magick and such stuff.  Crowley had a way of leaving behind these kind of sites, and in fact one of them is the reason this whole topic comes up today -- because one of Crowley's centers of operation, Boleskine House on the shores of Loch Ness, Scotland, recently sold after years of standing empty and decrepit for the tidy sum of £500,000 to "three unnamed investors."  The owners, who call themselves the "Boleskine Foundation," are now apparently in negotiation with the Ordo Templi Orientis (yes, it still exists) to bring back Crowley's practices to Boleskine and turn it into a "sex magick retreat." 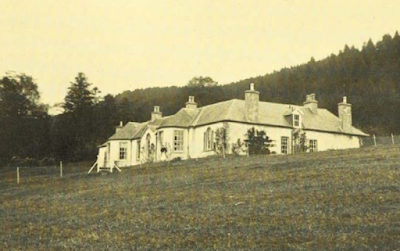 Boleskine in 1912, right before Crowley sold it [Image is in the Public Domain]

Apparently the house has a bit of a reputation even outside of Crowley's antics.  All the way back in the seventeenth century, there supposedly was a "devious local wizard" who kept reanimating corpses, and the minister of the church that stood on Boleskine's grounds spent most of his time trying to rebury them and get them to stay there.  The church itself burned to the ground, allegedly along with the entire congregation, in the early eighteenth century, and the first bit of Boleskine House itself was built in the middle of that century -- right over top of the graves that the minister had such a tough time keeping intact.  (You can see why someone as conscious of ambience as Crowley was would be attracted to the place.)

So Crowley bought Boleskine, and true to his self-styled title of the "Wickedest Man in the World," engaged in all sorts of depravity and hijinks with his friends for nearly fifteen years.  When Crowley sold the place in 1913, it went through a number of different owners, none of whom stayed there for long.  One supposedly killed himself by blowing his own head off with a shotgun.  It was owned for a time by Jimmy Page, guitarist for Led Zeppelin, although Page apparently wasn't there all that often.  His caretaker Malcolm Dent, however, said the place was haunted.  "One evening," he said, "a small porcelain figure of the Devil rose off the mantelpiece to the ceiling, then smashed into smithereens in the fireplace."  He also said he'd been awakened more than once by the sound of "a huge beast, snorting, snuffling and banging.  Whatever was there, I have no doubt it was pure evil."

To be fair, though, the owners who bought it from Page, the MacGillivray family, scoffed at the whole thing and said their time in Boleskine House was wonderful, and free from any paranormal fooling about.  So maybe the ghosts only appear to people who already believe in them.

In any case, the current owners are planning on renovating and reopening the place, and dedicating it to its previous use as a site for practicing the magickal arts.  Their public statement says that they will "promote events and activities that facilitate health and wellness such as meditation and yoga as well as education on Thelema, the spiritual legacy forwarded by previous Boleskine House owner, Aleister Crowley."

No word yet on any kinky sex stuff, although one would have to expect that's to be a part of it if they're striving for historical accuracy.  I'll keep you posted.

Posted by Gordon Bonnet at 5:18 AM