Sometimes, I swear the universe is listening to me.

In my post yesterday, a story about the "Falcon Creek Incident" in Manitoba, I mentioned that the story was a lot more credible than Roswell.  So it is only fitting that less than an hour after I hit "publish," I found that Jocelyne LeBlanc over at Mysterious Universe had just posted a story...

... that UFOlogists are reopening the Roswell case.

My first thought was that I've read a lot of accounts by UFOlogists, and my impression was that the Roswell case was not, and in fact never will be, closed.  You've all seen the famous "alien autopsy" video, which was sold to television stations in thirty-three different countries by a guy named Ray Santilli (who said he had gotten the film from an anonymous military officer), but what you may not know is that a filmmaker named Spyros Melaris admitted that he and Santilli had faked the entire thing.

All this got from the UFO enthusiasts was a wiggle of the eyebrow that says, "of course you know that if someone admits it's a hoax, it has to mean that they've been threatened by the Men in Black."  In other words, evidence against something is actually evidence for it, if you squinch your eyes up and look at it sideways. 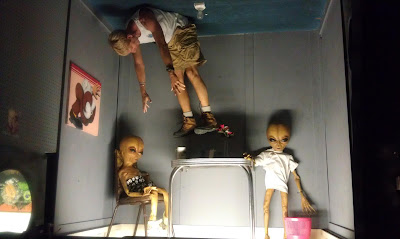 My visit to Roswell.  I'd tell you more, but I've been sworn to secrecy.

But you should prepare yourself for the whole thing rising from its shallow grave, ready to swallow the brains of True Believers everywhere, because there's just been a claim of a 2001 "leaked memo" involving physicists Kit Green and Eric Davis, and aerospace tycoon Robert Bigelow, and the memo says the autopsy video was real.

Better yet, Bigelow et al. claim there are still tissue samples from the alien being held at the Walter Reed-Armed Forces Institute for Pathology Medical Museum, located in Washington, D.C.

But I haven't told you how all of this stuff became public:

As soon as I saw this name, my eyes rolled back so far I could see my own brainstem.  Howe is one of the "ancient alien astronauts" loons, a protégé of Erich von Däniken, about whom RationalWiki has the following to say:


Howe's gullibility and deceptive "reports" have caused even staunch Ufologists to give her extremely low marks for credibility... She occasionally asks real scientists for opinions on these matters, but then promptly dismisses or rationalises them away.

In fact, the site UFOWatchdog.com is even more unequivocal:


Someone once summed up Howe very well with two words: ' Media entrepreneur '.  While having been a major player in the cattle mutilation mystery, Howe's credibility has gone way downhill as she sensationalizes everything from mundane animal deaths to promoting Brazilian UFO fraud Urandir Oliveira and the Aztec UFO Crash Hoax while selling alien books, videos and lectures.  Howe dabbles in all things strange including Bigfoot, crop circles, alien abductions, and UFOs.  Howe also sits on the board of advisors to the Roswell UFO Museum along with the likes of Don Schmitt.  See Howe's site, which she actually charges a subscription for in order to access some stories.  Also see Howe turning an explained animal death into an encounter with Bigfoot.  A leap not even Bigfoot itself could make.

So yeah.  There's that.  I know I was pretty charitable with the Falcon Lake Incident yesterday, but this one is just making me heave a heavy sigh of frustration.  No one would be happier than me if alien intelligence did turn out to be real; in fact, it might even make me feel better about the lack of intelligence I so often see down here on Earth.  But much as (in Fox Mulder's words) I Want To Believe, this one's just not doing it for me.