There's a peculiar fascination that people have with things that are oversized.  It's part of the fascination with dinosaurs, supermassive black holes, supervolcanoes, massive meteor strikes, megacyclones, and the like, with the added frisson that those can also kill you in nasty ways.

But just size can be impressive, irrespective of the likelihood of getting eaten, blown away, disintegrated, or whatnot.  Take, for example, two fossil bird species discovered last week in New Zealand.

The first is a parrot, dubbed Heracles inexpectatus, an accurate moniker given that it translates roughly to "unexpected bigass critter."  H. inexpectatus stood a meter tall, and the scientists who discovered it said that its bill was such that it could "crack open most food sources," which seems to me to be code for "that could easily include your skull."  While most parrots are fruit and seed-eaters, carnivorous parrots are not without precedent -- the kea, a large parrot species also from New Zealand, not only eats baby seabirds, it's been known to attack sheep and take bites of fat from their backs.

H. inexpectatus, being over twice as big, could have done a great deal more damage than that.  With H. inexpectatus, if Polly wants a cracker, you better fucking well give Polly a cracker or Polly will turn you into the next item on the menu.

The good thing (from our standpoint, anyhow) is that H. inexpectatus went extinct 19 million years ago.  So that's one less thing to worry about, nasty-death-wise.

Then there's the even larger penguin fossil, also from New Zealand, that was discovered by a team from Canterbury Museum in Christchurch.  This beast, dubbed Crossvallia waiparensis, stood 1.6 meters tall and weighed 80 kilograms -- in other words, outsizing a good many human beings. 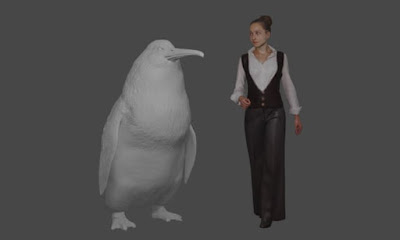 Being a writer of speculative fiction, this immediately put me in mind of the enormous albino penguins in H. P. Lovecraft's brilliant novella "At the Mountains of Madness," in which an expedition to Antarctica ends very, very badly for 90% of the characters.  In the story, the penguins themselves aren't dangerous (although they seem to be at first) but start acting bizarrely when something appears that is -- namely, Shoggoths, one of Lovecraft's more nightmarish creations, a blob-like shape-shifter whose favorite hobby is pulling people's limbs out of their sockets.  So even though no one is killed by an enormous penguin in the story, seeing this picture did give me a shudder.

Although Paul Scofield, senior curator of the Canterbury Museum, said, "When the Crossvallia species were alive, New Zealand and Antarctica were very different from today – Antarctica was covered in forest and both had much warmer climates."  Which is kind of the way Lovecraft described things.  So if you go to Antarctica and get dismembered by a Shoggoth, you can't say you weren't warned.

In any case, like the humongous parrot, the humongous penguins are no more.  They were around even earlier than H. inexplicatus, having reached their peak during the Paleocene Epoch, between 55 and 65 million years ago.  Generally, clement climate and plentiful food leads to animals evolving to become larger, so it's speculated that this is what was going on with MegaPenguin and SuperParrot.  Whatever the cause, though, they're pretty impressive.

So that's our cool science story for today.  Something to keep in mind when you feed the chickadees.  The little twittering feathery guys at your bird feeder may not look very impressive now, but in the past, they had some cousins that could kick your ass into the middle of next week.